Meticulously constructed roundtable that was made especially for Korean summit 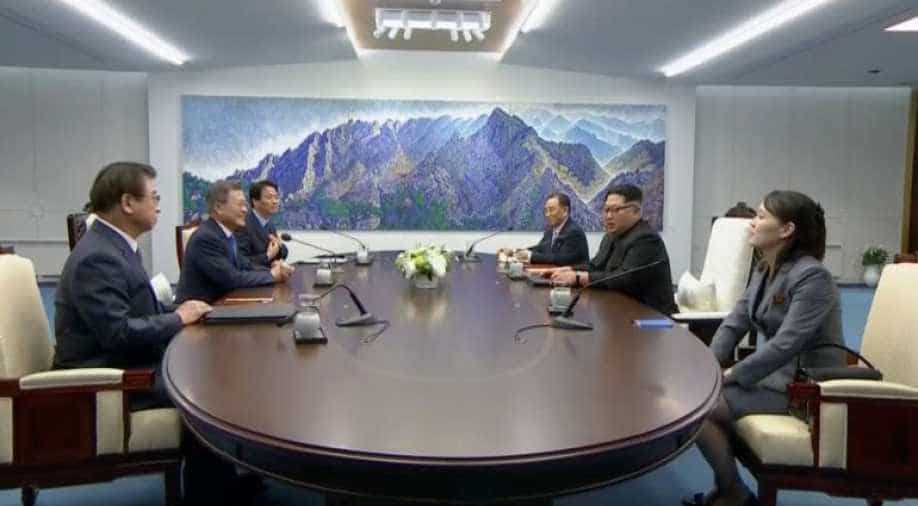 North Korean leader Kim Jong Un and South Korean President Moon Jae-in wrapped up the first round of talks a short while ago. Both the leaders will meet later in the afternoon.

The significance of the Peace House, a three-storeyed building located just across the demilitarised zone on the South Korean side of Panmunjom truce village, increased manifold today as the historic summit between the heads of two Korean nations took place at the location.

The Peace House is a spot where many bilateral talks and other political meetings took place earlier including the talks between North and South Korea held in January this year to ease the military tensions.

The room where the two leaders met underwent a dramatic makeover. The regular rectangular table was replaced with an oval-shaped one to encourage more candid engagement between the leaders.

According to reports, the roundtable, around which Kim Jon-Un and his South Korean counterpart Moon Jae-in were seated, was meticulously and specially constructed to live up to the grand scale of the historic event.

One of the most interesting facts about the table it that its diameter was kept at 2.018 meters to mark the year (2018) in which the historic Korean summit took place.

While the chairs were made of pure walnut wood, the table was decorated with peonies and daisies symbolising a warm welcome for the leaders and peace.

After entering the Peace House for the inter-Korean summit, Kim Jong Un wrote in the guest book "A new history starts now. An age of peace, from the starting point of history," Kim dated and signed the entry.

The two are scheduled to plant a memorial tree at the border around 0430 GMT to kick off the second session of the summit.

The meeting, aimed at ending their decades-long conflict and easing tensions over the North's nuclear weapons programme, comes weeks before Kim is due to meet US President Donald Trump.