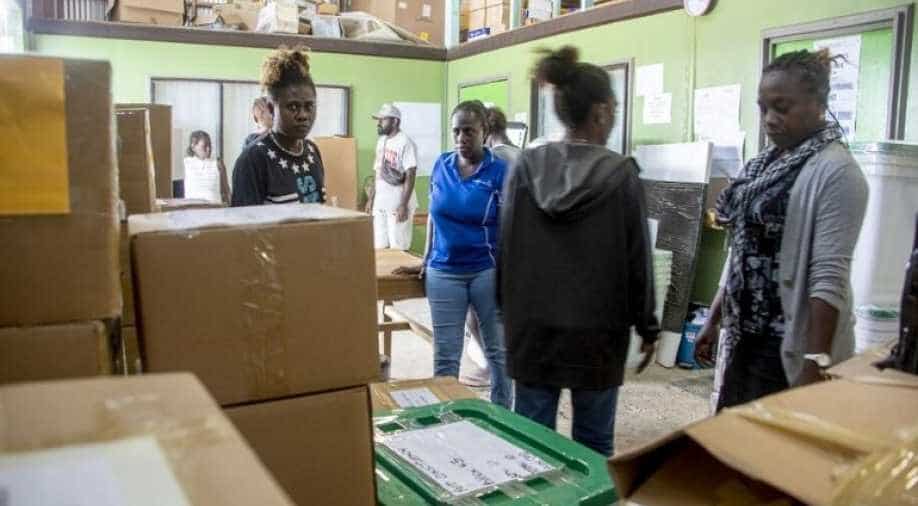 Workers get a polling station ready ahead of an historical independence vote, in the capital Buka on November 22, 2019. Photograph:( AFP )

Dozens of small boats, with pro-independence flags waving above, ferried people from smaller islands off Buka to vote in the city.

Joyous voters in the Pacific island chain of Bougainville cheered and sang as they flocked to the polls Saturday at the start of a long-awaited referendum on independence from Papua New Guinea.

In the early morning sun, more than 1,000 people waited eagerly to cast their ballots at one polling station in the main city of Buka, as others, festooned in grass garlands, formed makeshift choirs that stomped through the streets, waving independence flags, blowing bamboo pipes and chanting in chorus.

"I am so happy," said 54-year-old Olitha Mokela. "I am going to rejoice and the bamboo band must play and I'll dance and go and vote."

Dozens of small boats, with pro-independence flags waving above, ferried people from smaller islands off Buka to vote in the city.

Some 207,000 Bougainvilleans are registered to vote over the next two weeks, deciding whether the tiny Melanesian isles will spring from global obscurity to become the world's newest country.

Their choice is between full independence or greater autonomy within Papua New Guinea, a fractious nation of eight million people off the northeast coast of Australia.

The vote caps a 2001 peace deal that ended a brutal decade-long war between Bougainville rebels, PNG security forces and foreign mercenaries in which up 20,000 people were killed.

A steady stream of voters cast their ballots in similarly festive scenes at 21 stations around the territory throughout the day.

In Tinputz, a group of villages along the coast south of Buka, a large crowd butchered cows and pigs for a referendum day feast.

Results are due to be released around December 15 and supporters of full independence are expected to win handily, although, with no reliable opinion polls, a surprise is always possible.

If voters do choose independence, the decision would need ratification from the PNG parliament, where there is anxiety that Bougainville could set a precedent and spur other independence movements within the tribally diverse country.

But rejection would risk rekindling former feuds and skittling the peace process.

Bougainville regional president John Momis cautioned excited voters Saturday that the referendum was only one step in a long process and urged patience.

"We should not rush things, we should take our time to ensure a good outcome," he said, adding that a final result "could be five years" away.

But in a sign of hopeful cooperation with the national government, Momis was accompanied to the polling station by Puka Temu, Papua New Guinea's minister for Bougainville affairs.

Preparations for voting were peaceful, and across the nation, once-sworn enemies have taken part in tearful reconciliation ceremonies, where arrows were snapped to symbolise the end of a vicious conflict.

"It’s not often that we hear reports that people have put down their weapons and sought ways to mend fences and carry forward, establishing peace," chief referendum officer Mauricio Claudio said as voting wound down for the day on Saturday.

He described Saturday's turnout as "very good", which he said augured well for the rest of the voting process.

Since French explorer Louis de Bougainville arrived on the palm-fringed archipelago more than 200 years ago, control passed in turn from Germany to Australia, Japan and the United Nations before administration was handed over to Port Moresby.

But the territory has historically shared a closer affinity with the neighbouring Solomon Islands than Papua New Guinea.

T-shirts promoting independence, depicting the distinctive men's amphora-shaped "upe" headdress, and emblazoned with the words "black is beautiful" in a nod to the ethnic identity of many Bougainvilleans, sold fast at the Buka market in the run-up to the referendum.

Independence for Bougainville could instantly make the islands a new front in the battle for influence being waged across the South Pacific between China, the United States and Australia.

They are among the poorest in the southern hemisphere and the need for cash to build infrastructure, develop institutions and balance the books "creates an opportunity for actors like China to get involved", said Jonathan Pryke of Sydney's Lowy Institute.

The 1988-1998 war had its roots in a struggle over revenues from the now-shuttered Panguna copper mine, which at one point accounted for more than 40 per cent of Papua New Guinea's exports.

The mine is estimated to still hold more than five million tonnes of copper and 19 million ounces of gold,  worth billions of dollars at current market prices.

Who controls that wealth is likely to be vital in determining whether a newly born Bougainville succeeds.