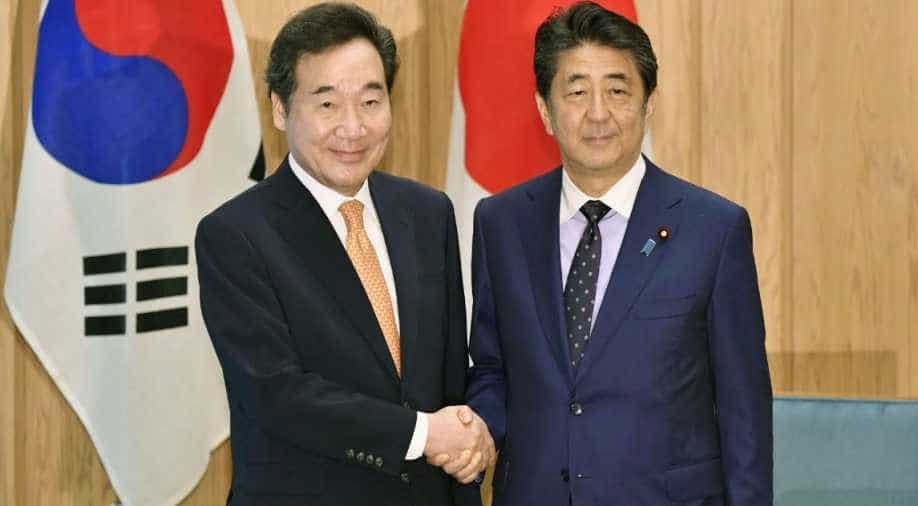 Abe reiterated that South Korea would need to keep its promises for ties between the two Asian allies of Washington to improve.

Japanese Prime Minister Shinzo Abe and South Korean Prime Minister Lee Nak-yon agreed on Thursday on the importance of cooperating on North Korea and other issues, seeking to rebuild relations amid a bitter feud over history and trade.

But there was a scant sign of real progress and Abe reiterated that South Korea would need to keep its promises for ties between the two Asian allies of Washington to improve.

Relations between Tokyo and Seoul have deteriorated to their lowest in decades since South Korea's top court last October ordered some Japanese firms to compensate Koreans forced to work in their wartime mines and factories.

Japan, which says the matter was settled by a 1965 treaty, calls the decision a violation of international law, and the feud has spilt over into trade and security matters.

About 100 journalists were present at the start of talks in Tokyo, the highest-level meeting between the two sides since the row flared. The meeting began with a handshake but no smiles.

Abe urged Seoul to keep its promises - a reference to the 1965 treaty - in order to restore relations, according to the statement issued by Japan's foreign ministry.

"Our two nations are important neighbours for each other, and keeping in contact over North Korea, bilateral relations and our ties with the United States are quite important," Abe was quoted as telling Lee.

"Relations are currently in quite a severe state but should not be left that way. If South Korea can keep bilateral promises, that could be a chance to return to a healthy relationship," Abe added.

The statement also quoted Lee as saying he shared the view that dialogue was important, while a parallel statement from South Korea's foreign ministry said Lee agreed relations should not be left in their current difficult state.

In a sign that gaps remain wide, Lee told Abe: "South Korea has also respected and complied with the 1965 Treaty on Basic Relations and Claims, and will continue to do so," according to Seoul's statement.

Moon and Abe have not held a summit in more than a year and the statements made no mention of any meeting planned between the two.

A Japanese government official questioned whether Thursday's meeting would lead to a breakthrough. "It depends on their (South Korea's) deeds, not words," the official told Reuters.

The animosity between Japan and South Korea is linked to the history of Japan's 1910-45 colonisation of the Korean peninsula, the mobilisation of forced labour at companies and women in wartime military brothels, and a row over the ownership of islets in the sea between the two nations.

Earlier this year, the dispute escalated when Japan tightened export controls on materials vital for South Korean chipmakers. It then dropped Seoul from a list of countries eligible for fast-track exports, steps angrily denounced by South Korea.

The spat has prompted protests in South Korea, where Japanese companies and products have been boycotted, and trade between the two countries has slowed sharply.

In August, South Korea announced it would scrap a military intelligence-sharing pact with Japan when it expires next month, just as the allies face rising tensions over North Korea's nuclear weapons programme and increased competition from China and Russia.

Thousands of South Korean students and activists are expected to gather on Friday to celebrate "Dokdo Day". Dokdo is the Korean name for islets claimed by South Korea and by Japan, which calls them Takeshima.

"Precautions must be taken to prevent that," said Yang Kee-ho, professor of Japanese Studies at Sungkonghoe University.