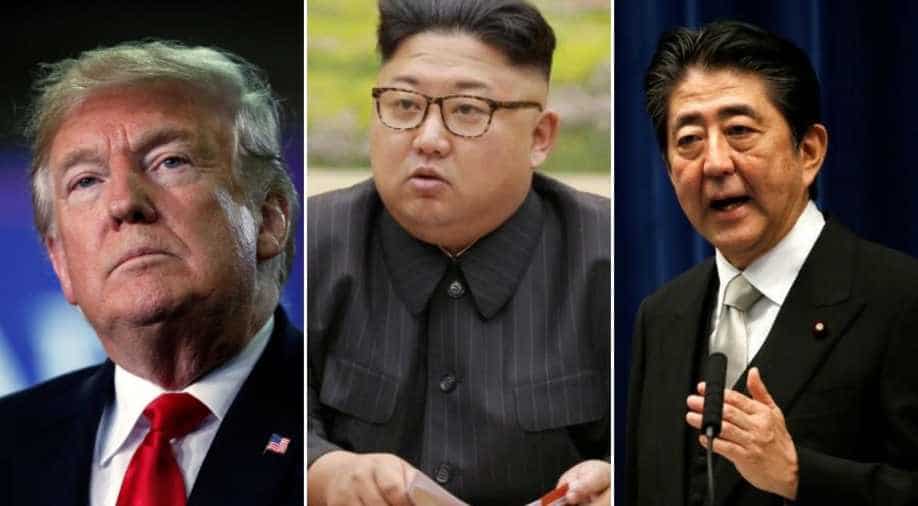 Trump, who prizes his relationship with North Korean leader Kim Jong-un, said the launches did not violate an agreement.

US President Donald Trump and Japanese Prime Minister Shinzo Abe displayed their differences over the seriousness of North Korea's series of short-range missile launches on Sunday while maintaining that they would remain in sync on the issue.

Trump, who prizes his relationship with North Korean leader Kim Jong-un, said the launches did not violate an agreement and were in line with what others were doing. Abe said the launches violated UN resolutions.

Launches of short-range ballistic missiles on Saturday were the seventh by North Korea since Trump and Kim met at the inter-Korean border in June.

The launches have complicated attempts to restart talks between US and North Korean negotiators over the future of Pyongyang's nuclear weapons and ballistic missile programmes.

North Korea fired what appeared to be two short-range ballistic missiles into the sea off its east coast, the South Korean military said, the latest in a series of launches in recent weeks amid stalled denuclearization talks.

Photos released by North Korean state media showed rockets launching from large tubes mounted on the back of an eight-wheel vehicle.

Analysts said it appeared to be at least the fourth new missile system unveiled by North Korea since denuclearization talks stalled at a February summit between Kim and US President Donald Trump.

North Korea must step up development of new strategic and tactical weapons to counter "ever-mounting military threats and pressure offensive of the hostile forces," Kim said on Saturday, according to KCNA.

North Korea's young defence scientists who developed the missiles are a "precious treasure and wealth of the country which cannot be bartered for anything," Kim said.

On Saturday, a KCNA commentary said North Korea "will never barter the strategic security of the country for the sanctions relief."

American officials have been trying to restart the stalled talks with North Korea over its nuclear weapons and ballistic missile programs, which are heavily sanctioned.

After the latest tests, Trump again touted his good relationship with Kim and said the North Korean leader had been "pretty straight with me."