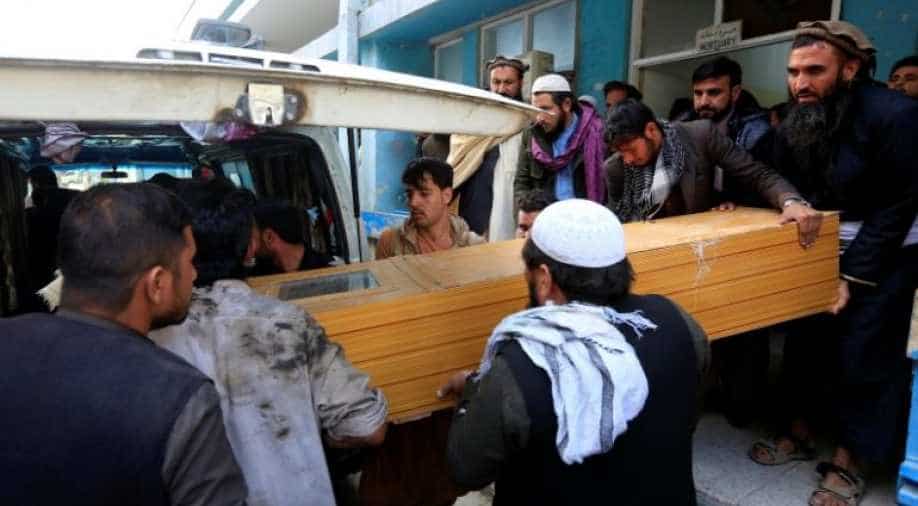 Men carry the coffin of an Afghan victim of an attack on a vehicle carrying Japanese doctor Tetsu Nakamura, in Jalalabad, Afghanistan December 4, 2019. Photograph:( Reuters )

Japanse physician and aid worker, Tetsu Nakamura, was shot dead along with five Afghans including his bodyguards, driver and another passenger in an attack in Afghanistan on Wednesday.

The Japanese aid agency was shot on the right side of his chest when gunmen open fired on his car in Jalalabad in Nangarhar province, said Afghan officials.

The doctor underwent surgery at a local hospital and was in the process of being transferred to Bagram near Kabul when he passed away at the Jalalabad airport.

“Sadly, Dr Nakamura has passed away from the wounds he received in the armed attack this morning,” said a spokesman for Nangarhar’s governor.

The attack on the aid worker comes a week after a grenade attack on a United Nations vehicle in Kabul increasing fears of the humanitarian workers in the conflict-ridden region.

Nakamura, the head of Peace Japan Medical services - known as Peshawar-kai in Japanese - devoted 35 years of his life to healing the wounded in Afghanistan of which he became an honorary citizen last year in October.

The doctor had opened a clinic in a remote village in Afghanistan in 1991, before which he treated leprosy in Pakistanis and sick Afghan refugees. The native Fukuoka had been heading the Nangarhar aid group since 2008.

Nakamura, last year claimed last year that his posting was meant to be for “five or six years” in an interview with national broadcaster NHK. “The plan was to come home when I was done.”

“We didn’t have proper facilities (for surgery and rehabilitation) but I couldn't just run away and abandon these people," he said.

There was no immediate claim for the responsibility of the attack for which the Taliban has denied responsibility claiming to have “good relations” with organisations that “contribute to the reconstruction of Afghanistan.”

Japan Prime Minister Shinzo Abe said he was “shocked” at the aid worker’s death who risked his life to do “various work” for which the people of Afghanistan were thankful.

"I am shocked that he had to die in this way," Abe told reporters in a news conference in Tokyo.

"He risked his life in a dangerous environment to do various work, and the people of Afghanistan were very grateful to him," he added.

The police have launched a search operation to arrest the gunmen who fled the scene said officials who claimed to believe that the doctor was targeted for his work.

"Dr Nakamura has been doing great work in the reconstruction of Afghanistan, especially in irrigation and agriculture," the official said.

"He has dedicated all his life to change the lives of Afghans."