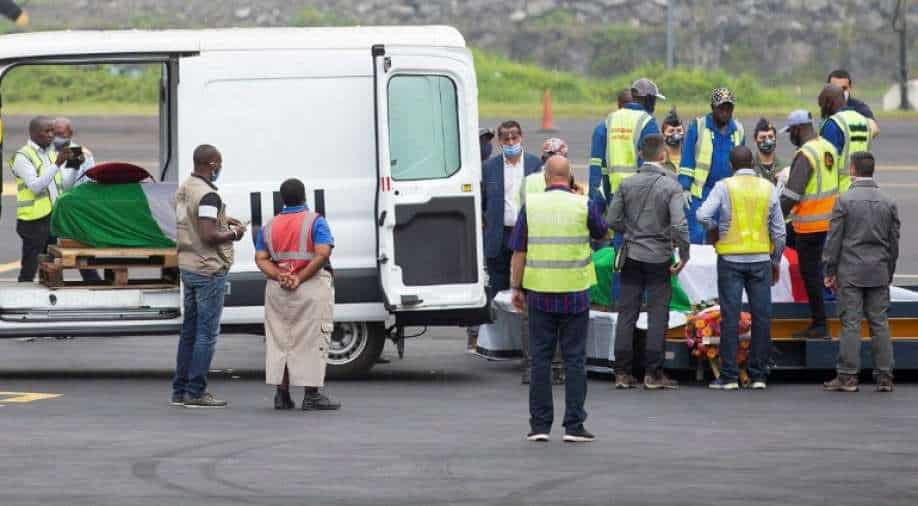 Officials prepare to load the bodies the slain Italian ambassador to Democratic Republic of Congo Luca Attanasio and his Italian security Vittorio Iacovacci, who were both killed in an attempted kidnap when their convoy was attacked in Ruhimba village, into a military plane at the Goma airport in eastern Democratic Republic of the Congo  Photograph:( Reuters )

The body of both the Italians, draped in Italian flags, reached Rome late on Tuesday, with the Italian Prime Minister Mario Draghi receiving them at the Rome airport

Italy on Wednesday asked the United Nations for a probe into the killing of its envoy to the Democratic Republic of Congo.

"We have formally asked WFP (World Food Programme) and the UN to open an investigation to clarify what happened, the reasons behind the security arrangements used and who was responsible for these decisions," Foreign Minister Luigi Di Maio told parliament.

He said "clear and exhaustive answers" are awaited.

The body of both the Italians, draped in Italian flags, reached Rome late on Tuesday, with the Italian Prime Minister Mario Draghi receiving them at the Rome airport.

The DRC's interior ministry on Monday blamed "members of the Democratic Forces for the Liberation of Rwanda (FDLR)" for the killings.

FDLR is a Rwandan Hutu rebel group that has plagued the region for over 25 years.

However, the Rwandan rebel group denied the allegation and, instead blamed the Rwandan army and the Armed Forces of the Democratic Republic of the Congo (FARDC) for the act in a statement.