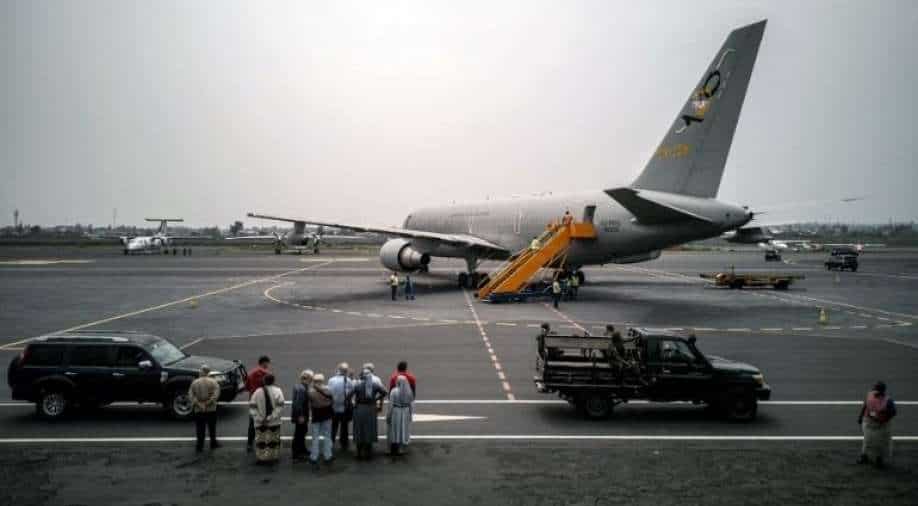 An Italian Air Force plane waits on the tarmac of Goma airport before it repatriates the bodies of slain Italian Ambassador and of an Italian Carabinieri police officer on Tuesday. Photograph:( AFP )

The envoy's Italian bodyguard, Vittorio Iacovacci, and a Congolese driver, who has not been identified also died on the field trip

Rwandan Hutu rebels on Tuesday denied accusations they were behind the killing of the Italian ambassador to the Democratic Republic of Congo and instead blamed the armies of the DRC and Rwanda, as further details emerged about the attack.

Luca Attanasio, 43, died on Monday after a World Food Programme (WFP) convoy was ambushed in a dangerous part of eastern DRC.

The envoy's Italian bodyguard, Vittorio Iacovacci, and a Congolese driver, who has not been identified also died on the field trip.

The DRC's interior ministry on Monday blamed the killings on 'members of the Democratic Forces for the Liberation of Rwanda (FDLR)', Rwandan Hutu rebel group that has plagued the region for more than a quarter of a century.

But the FDLR rejected the allegation, blaming the Rwandan army and the Armed Forces of the Democratic Republic of the Congo (FARDC) for the attack in a statement received on Tuesday.

It said the ambassador's convoy was attacked near the Rwandan border, 'not far from a position of the FARDC'.

"The responsibility for this despicable killing is to be found in the ranks of these two armies and their sponsors, who have forged an unnatural alliance to perpetuate the pillaging of eastern DRC," it said.

The FDLR called on Kinshasa and UN peacekeeping force MONUSCO to 'shed light' on the killings 'instead of resorting to hasty accusations'.

The DRC and Rwanda authorities have not reported the presence of any regular Rwandan troops in the DRC.

But an expert at the Kivu Security Tracker (KST), a US monitor, said the Hutu rebel group has a known presence in the region.

"The FDLR are near the place where the attack took place. It's in the realm of possibility that the Rwandan rebels are responsible for this attack," the expert said, speaking on condition of anonymity.