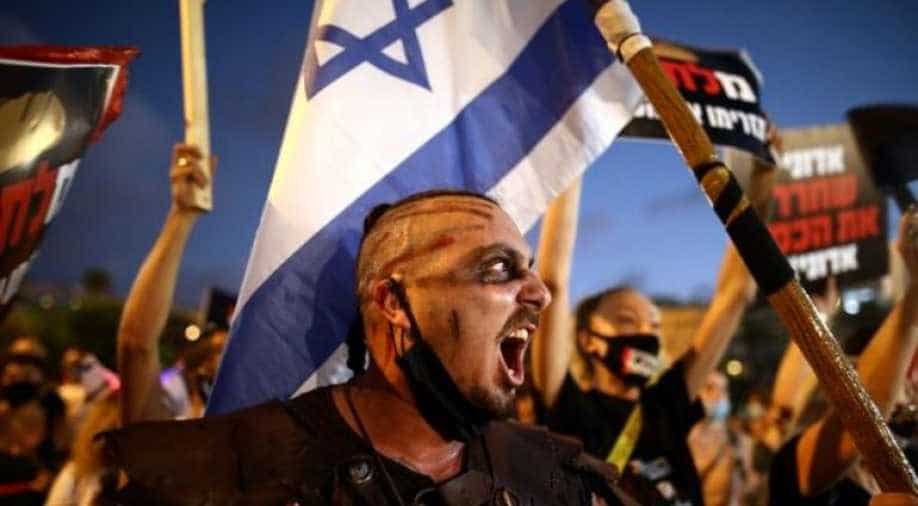 Amid rising COVID-19 cases, Prime Minister Benjamin Netanyahu reimposed a series of restrictions in a bid to contain infections, shutting down a slew of businesses again.

Thousands of Israelis demonstrated on Saturday in Tel Aviv, angered by what they say has been an inept government response to the economic hits they have taken during the coronavirus crisis.

In keeping with restrictions on public gatherings, police limited the number of people allowed into Tel Aviv`s Rabin square for the rally as nearby streets filled with demonstrators wearing face masks.

"I have 40 workers with no income, no money," said Michal Gaist-Casif, vice president of a sound and lighting company.

"We need the government to pump in money until we`re back to normal. We haven`t been working since mid-March through April, May, June and July, and August is looking to be a catastrophe."

Israeli media said thousands attended the rally. No official figure for the number of protesters was given.

Unemployment in Israel has soared to 21 per cent since the country went into partial lockdown in March and aid packages promised by the government have been slow to come through, frustrating Israelis who fear they are on the verge of economic collapse.

Alarmed by a new spike in COVID-19 cases which surged after the economy began reopening, Prime Minister Benjamin Netanyahu this week reimposed a series of restrictions in a bid to contain infections, shutting down a slew of businesses again.

With less than half of the $29 billion previously pledged in aid paid out and anger building, Netanyahu announced a new welfare package on Thursday, saying the measures would provide an economic safety net for the coming year.
In the past few weeks, protesters from across the political spectrum have taken to the streets with demands for speedier compensation from the coalition government, which they see as overstaffed and ineffectual.

"People feel helpless, there`s no response. They are enraged and want the government to take responsibility," said Roee Cohen, president of the Israel Chamber of Independent Organizations and Businesses.