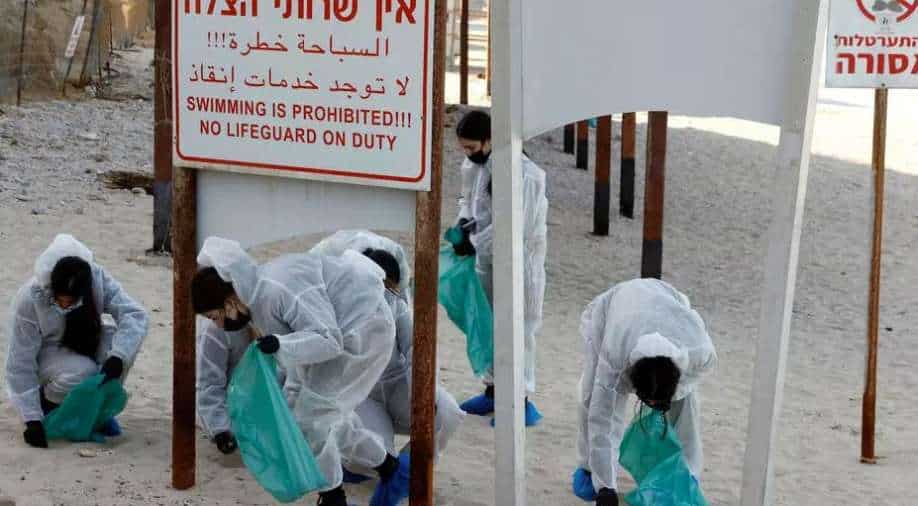 Powerful winds and unusually high waves pummelled Israel's entire Mediterranean coastline on February 17, with tonnes of tar staining 160 kilometres (96 miles) of beach from its borders with the Gaza Strip to Lebanon.

Authorities in Israel have cleared a Greek tanker of suspicion in relation to an oil spill that caused massive tar pollution on the Mediterranean coastline.

It was seen as Israel's worst maritime pollution incident in decades.

Powerful winds and unusually high waves pummelled Israel's entire Mediterranean coastline on February 17, with tonnes of tar staining 160 kilometres (96 miles) of beach from its borders with the Gaza Strip to Lebanon.

On Sunday, the ministry said that "following an inspection conducted in Greece on the Minerva Helen tanker, it has been cleared of suspicion of involvement in the severe tar event on Israel's beaches". The ship's owner said the Israeli media report was an "unfounded an inaccurate allegation".

It stated that the ship had been in the Mediterranean in the days before the storm, "without any cargo on board" and therefore could not be linked to a spill.

The company also pledged to "cooperate with any relevant authority" interested in the Minerva Helen's movements.

On Saturday in the Greek port city of Piraeus, Israeli inspectors conducted "an extensive examination" of the Minerva Helen that "positively ruled out the vessel as the source of the pollution," the environmental protection ministry said in a statement.

The investigation was conducted in coordination with Greek authorities, with assistance from the Hellenic Coast Guard, the ministry said.

According to the ministry, there were currently "dozens" of vessels under suspicion, with Israeli inspectors, aided in some cases by international bodies, already ruling out around 10 of them.

Meanwhile, volunteers have teamed up with authorities to clean the beaches, while officials from the environmental protection ministry launched an investigation into the source of the spill.