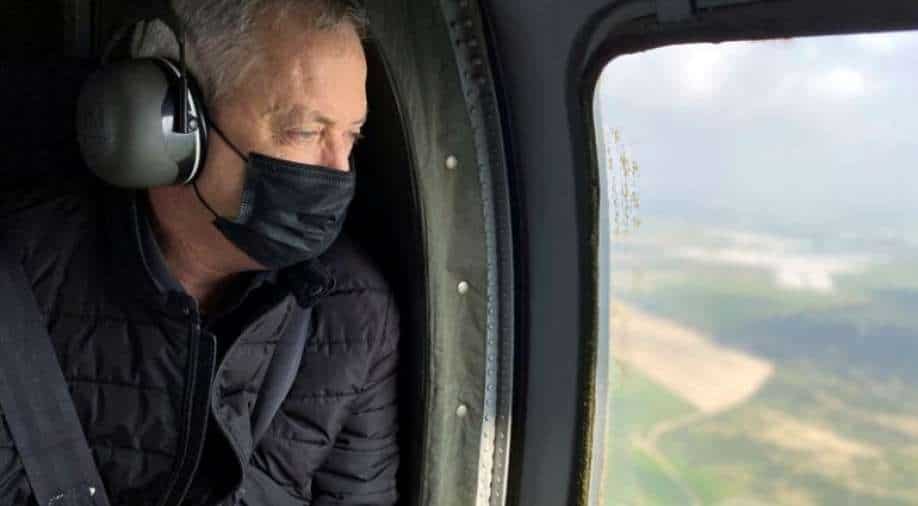 Israeli Defence Minister Benny Gantz wears a face mask as he looks out from the window of a helicopter during a tour of the Gaza border area (file photo) Photograph:( Reuters )

Israel describes the roadblocks, condemned by Palestinians and rights groups as restricting freedom of movement, as a security necessity

Israel announced on Tuesday that it approved registration as West Bank residents for some 4,000 Palestinians who have been living for years in the Israeli-occupied territory without official status.

The decision affects 2,800 former inhabitants of the Gaza Strip who left the enclave after Hamas Islamist militants seized it in internal Palestinian fighting in 2007, Israel's COGAT liaison office to the Palestinians said.

Some 1,200 other Palestinians, among them undocumented spouses and children of West Bank residents, will also receive official standing.

Inclusion in the Palestinian Population Registry, which Israel controls, will enable the group to receive identification cards. The documentation will enable passage through Israeli military checkpoints in the West Bank, an area captured in a 1967 war.

Israel describes the roadblocks, condemned by Palestinians and rights groups as restricting freedom of movement, as a security necessity.

On Twitter, Israeli Defence Minister Benny Gantz said he approved the 4,000 residency registrations as a humanitarian gesture and "as part of my policy to strengthen the economy and improve the lives of Palestinians" in the West Bank.

Hussein Al Sheikh, a senior official of the Palestinian Authority (PA) that exercises limited self-rule in the West Bank, said on Twitter that the 4,000 "obtained their right to citizenship" and would receive identification cards.

Under interim peace deals in the 1990s that established the PA, the Palestinian side was given the right, with prior approval by Israel, to grant permanent residency in the West Bank and Gaza to spouses and children of Palestinian residents. The accords did not specify any family reunification figures.

Rights groups that examine Israeli activities in the occupied territories said a quota system was put into effect, with the number of reunification requests to be considered annually by Israel rising to 4,000 in the year 2000.

Israel froze the process at the start of a Palestinian uprising in September 2000. It granted some 32,000 reunification requests in 2008 and 2009, but has largely suspended approvals, save for a smattering of humanitarian cases, since then.

Gantz gave the new approvals some seven weeks after holding talks with Palestinian President Mahmoud Abbas in the West Bank city of Ramallah. It was the highest-level meeting between Abbas and an Israeli minister to be made public since Israel's new government was formed in June.

Israeli Prime Minister Naftali Bennett, a far-right politician, opposes the creation of a Palestinian state, a divisive issue his cross-partisan government is unlikely to pursue. Israeli-Palestinian peace talks collapsed in 2014.