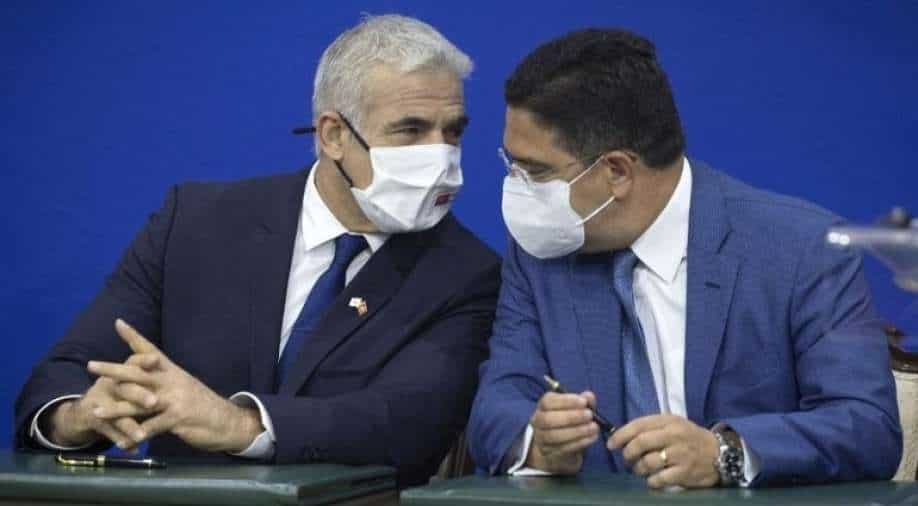 The foreign ministers of Morocco and Israel signed three accords on Wednesday during the first visit by a top official from the Jewish state since ties were normalised last year.

Lapid told reporters the accords would "bring our countries innovation and opportunities for the benefit of our children, and their children, for years to come".

Bourita hosted Lapid in the first visit by Israel's top diplomat to the North African kingdom since 2003, after the two countries agreed in December to resume diplomatic relations under a US-brokered deal.

"Our ties with Israel are unlike any other ties," Bourita, standing alongside Lapid, told reporters, saying that Morocco's Jewish heritage was a core component of its identity.

But reiterating Morocco's long-standing support for the Palestinians, Bourita said: "There is a need to restore trust between all parties ... and refrain from fuelling tension in order to pave the way for a political solution based on the two-state solution."

Morocco was one of four Arab countries, along with the United Arab Emirates, Bahrain, and Sudan to move towards normalising relations with Israel last year under US-engineered accords.

Those agreements angered Palestinians, who have long relied on Arab support in their quest for statehood in the Israeli-occupied West Bank and Gaza. Until last year, only two Arab states - Egypt and Jordan - had forged full ties with Israel.

Moroccan officials say they have restored the mid-level relations that Rabat cooled in 2000 in solidarity with the Palestinians, who launched an uprising that year.

Lapid said Israel's upgraded ties with Morocco would bring "benefits (for) tourism and the economy, for trade and cultural exchange, (and) for friendship and cooperation."

During his two-day visit, Lapid will inaugurate Israel's diplomatic mission in Rabat and visit Casablanca's Temple Beth-El, a centrepiece of the country's historic Jewish community.

Morocco had one of the largest Jewish communities in the region until Israel's founding in 1948. As Jews fled or were expelled from many Arab countries, an estimated 250,000 left Morocco for Israel from 1948 to 1964.

Only about 3,000 Jews remain in Morocco, but hundreds of thousands of Israelis claim some Moroccan ancestry.

Andre Levy, an Israeli of Moroccan Jewish descent who was born in Casablanca and was visiting Morocco with his two children, said the upgraded relations would bring more tourism.

"Even before ties resumed I used to visit regularly. But now more Israelis from the second and third generation will come," Levy said.