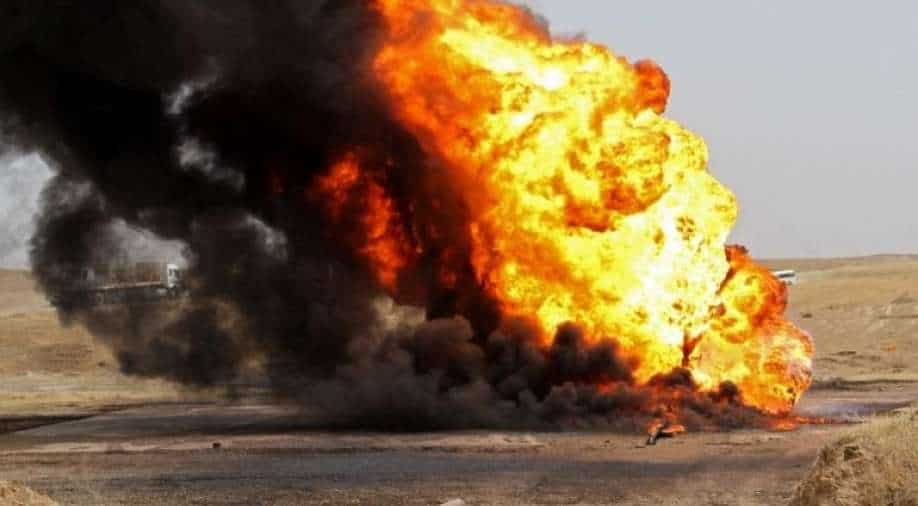 Fire and black smoke rise from an oil well in the Bay Hassan oil field, in the northern Iraqi province of Kirkuk, after being blown up by jihadists, on May 5, 2021. Photograph:( AFP )

The first fire was "brought under control in record time", but "firemen are still active at the second" well several hours after the attack

Jihadists on Wednesday killed a policeman before blowing up two oil wells in Kirkuk, a northern province claimed by both Iraq's federal government and the Kurds, officials said.

The attackers then "blew up wells 177 and 183 at the Bay Hassan field," the oil ministry said in a statement.

The first fire was "brought under control in record time", but "firemen are still active at the second" well several hours after the attack, the ministry added.

Iraqi Kurdish peshmerga forces took control of Kirkuk, home to key oilfields including Bay Hassan, in June 2014 after federal forces withdrew in the face of an IS offensive.

In late 2017, Baghdad officially claimed victory against IS, after a grinding military campaign supported by a US-led coalition.

But the Kurds, who run an autonomous government in Arbil, and the federal government dispute ownership of Kirkuk's lucrative oilfields.

IS maintain an ability to perpetrate hit-and-run attacks, operating mainly at night and often exploiting the discord between Baghdad and Arbil.

Iraq is the second-biggest producer in the OPEC cartel of oil-producing nations.