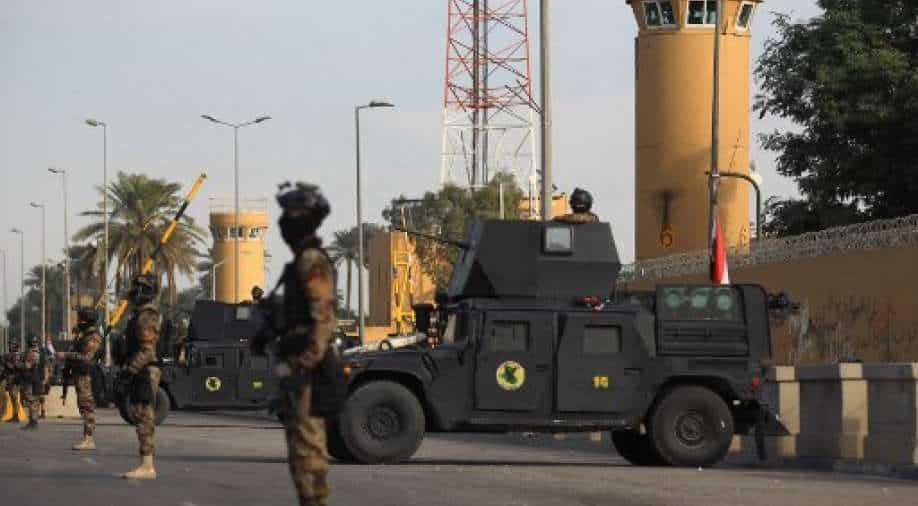 Iraqi counter-terrorism forces stand guard in front of the US embassy in the capital Baghdad Photograph:( AFP )

At least three rockets hit the Iraqi military air base of Balad, north of Baghdad, where some US contractors are billeted, Iraqi security officials said on Monday

The Iraqi army said two rockets were fired Tuesday at a base hosting Americans, in the third such attack in three days and as a US government delegation is visiting the country.

The two rockets fell on an unoccupied segment of the Ain-al-Assad airbase, "without causing damage or casualties," the army said.

The latest rocket attack follows one against an airbase at Baghdad airport housing US-led coalition troops on Sunday night, and another against Balad airbase, which hosts US contractors, north of the capital on Monday night.

None of the attacks have so far been claimed, but Washington routinely blames Iran-linked Iraqi factions for such attacks on its troops and diplomats.

Pro-Iran Iraqi groups have vowed to ramp up attacks to force out the "occupying" US forces in recent months, sometimes against Tehran's wishes, according to some experts.

Iraq's Prime Minister Mustafa al-Kadhemi, perceived by pro-Iran factions as too close to Washington, on Tuesday discussed the presence of 2,500 US soldiers based in Iraq with US envoy Brett McGurk.

The men know each other well -- Kadhemi, in his role as head of intelligence, a position he retains to this day, worked closely with McGurk when he was the US-led coalition's representative.

The military coalition was set up to fight the Islamic State jihadist group, which seized control of a third of Iraq in a lightning 2014 offensive.

Iraq declared victory against the jihadists in late 2017 and pressure from Shiite public opinion for the US to withdraw all its troops has mounted in the years since.

Kadhemi and McGurk are working on drawing up a timetable for the "withdrawal of combat forces from Iraq," according to a statement by the prime minister's office.

Around 30 rocket or bomb attacks have targeted American interests in Iraq -- including troops, the embassy or Iraqi supply convoys to foreign forces -- since President Joe Biden took office in January.

Two foreign contractors, one Iraqi contractor and eight Iraqi civilians have been killed in the attacks.

Last month, an explosives-packed drone slammed into Iraq's Arbil airport in the first reported use of such a weapon against a base used by US-led coalition troops in the country, according to officials.

Dozens of other attacks were carried out in Iraq from autumn 2019 during the administration of Biden's predecessor Donald Trump.

The operations are sometimes claimed by obscure groups that experts say are smokescreens for Iran-backed organisations long present in Iraq.

The rocket attacks come at a sensitive time as Tehran is engaged in talks with world powers aimed at bringing the US back into a 2015 nuclear deal.

The agreement, which curbs Iran's nuclear programme in exchange for sanctions relief, has been on life support since Trump withdrew in 2018.