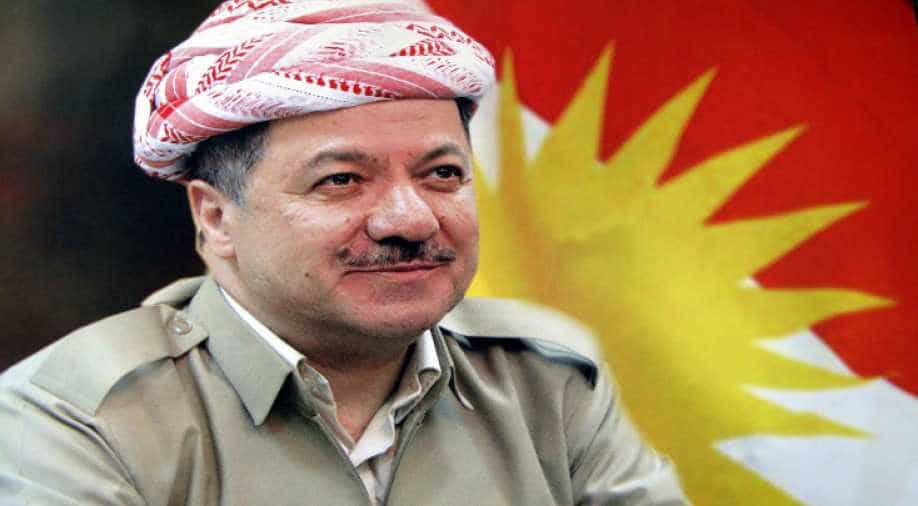 "The freezing of the results of the referendum... and the start of an open dialogue"- Masoud Barzani said

Iraqi Kurdish leaders offered Wednesday to freeze the outcome of last month's vote for independence, taking a step back in a major crisis that prompted Baghdad to seize swathes of disputed territory.

The offer came as world powers scrambled to avert any further escalation of the conflict between the key allies in the fight against the Islamic State group that has seen more than 30 combatants killed.

There was no immediate reaction from Baghdad but the Hashed al-Shaabi (Popular Mobilisation) force, whose mainly Iran-trained Shiite paramilitaries played a major role in the operation against the Kurds, said a freeze did not go far enough and demanded the outright annulment of the independence referendum.

Washington, Moscow and the United Nations have all pressed Iraqi Kurdish leader Massud Barzani to open talks with Baghdad on a way out of the crisis sparked by the fateful September 25 vote that he called.

The Kurdistan Regional Government, led by Barzani, said it would propose to the federal government "the freezing of the results of the referendum... and the start of an open dialogue" on the basis of the constitution.

It also called for "an immediate ceasefire and cessation of military operations in Kurdistan".

Since early last week, Iraqi federal troops and allied militia have retaken virtually all of the territory held by the Kurds outside their longstanding three-province autonomous region in the north.

Vote must be annulled

The Hashed al-Shaabi, which has taken a hard line in the dispute with the Kurds, demanded that they annul the independence vote as a precondition for any dialogue.

"The Kurdish proposal is worthless because freezing the referendum means recognising it and the position of the Iraqi government is clear, the referendum must be annulled," Hashed spokesman Ahmed al-Assadi told AFP.

The independence referendum deeply divided Iraqi Kurdish leaders and many commanders ordered their forces to pull back without resisting.

The loss of so much territory, including the major city of Kirkuk and lucrative oil fields, dealt a huge blow to Kurdish dreams of economic self-sufficiency and eventual independence.

Barzani's longtime political rival, the Patriotic Union of Kurdistan, had opposed the independence vote and backed a UN plan for negotiations on wider Kurdish autonomy.

The Iraqi constitution adopted during the US-led occupation of 2003-11 provides for plebiscites in the disputed areas on their possible incorporation in the autonomous Kurdish region.

Washington has made clear that while it will not take sides in the conflict between its Iraq allies, it does not regard Baghdad's reoccupation of the disputed areas as a fait accompli.

"The reassertion of federal authority over disputed areas in no way changes their status -- they remain disputed until their status is resolved in accordance with the Iraqi constitution," State Department spokeswoman Heather Nauert said on Friday.

The United Nations said on Tuesday that it stands ready to broker talks.

UN envoy Jan Kubis "expressed confidence that despite the recent tensions, Iraq will be able to ride this crisis".

"Both sides publicly expressed their willingness to engage in dialogue and negotiations on the basis of the Constitution. The UN is ready to assist, if requested," he said.

"We are confident that the Government of Iraq and the Kurdistan Regional Government, just like they banded together to defeat Daesh (the Islamic State group), can work hand in hand to overcome their differences through dialogue and away from confrontation to resolve all outstanding issues in a manner that is consistent with the constitution."

Iraqi Prime Minister Haider al-Abadi, whose domestic prestige has been sharply boosted by the return of the disputed territories to federal control, has been on a tour of regional countries which share his hostility to Kurdish moves towards secession.

He also held talks in Baghdad on Monday with US Secretary of State Rex Tillerson.

On Wednesday, he was due in Ankara for talks with Turkish leaders, who are particularly opposed to any talk of Kurdish separatism having fought a more than three-decade long insurgency among its own Kurdish minority, the region's largest.

Iraq's border with Turkey is currently all in Kurdish hands and Abadi has said that top of the agenda of his talks will be his demand that the federal government retake control of border crossings.