Iran cannot allow 'insecurity' in the face of protests: Rouhani 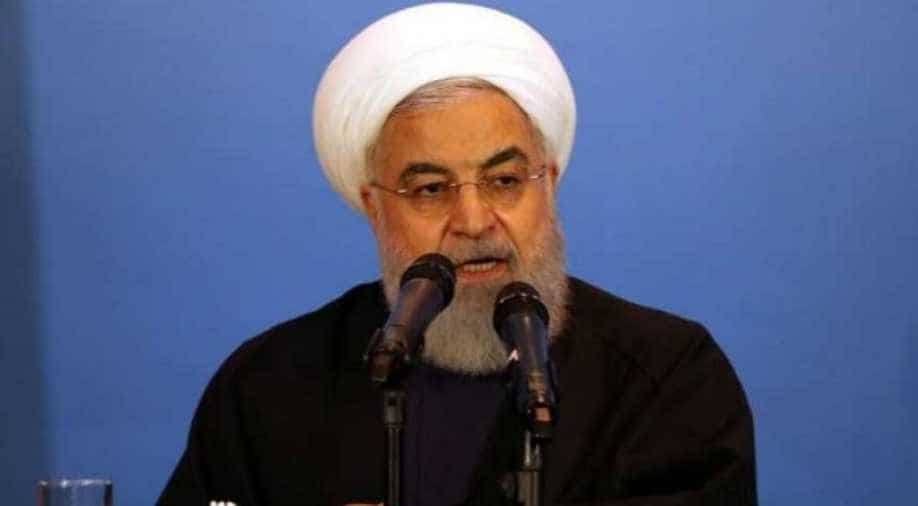 "Protesting is the people's right, but protesting is different from rioting. We should not allow insecurity in the society," he said.

Rouhani defended the controversial petrol price hike that triggered the protests, a project which the government says will finance social welfare spending amid a sharp economic downturn.

The unrest erupted on Friday, hours after it was announced the price of petrol would rise to 15,000 rials per litre (12 US cents) from 10,000 for the first 60 litres, and to 30,000 rials for any extra fuel bought after that each month.

It is a rise many consumers can ill afford, given that Iran's economy has been battered since May last year when President Donald Trump unilaterally withdrew the US from a 2015 nuclear agreement and reimposed crippling sanctions.

The rial has plummeted, inflation is running at more than 40 per cent and the International Monetary Fund expects Iran's economy to contract by 9.5 per cent this year and stagnate in 2020.

The petrol plan is expected to generate 300 trillion rials ($2.55 billion) per annum, from which the government says about 60 million needy would receive payments.

"For this... we should either increase taxes on the people, export more oil... or reduce subsidies and return the revenues to the people in need," said Rouhani.

"All the centres of the world's wickedness against us have cheered" the street protests, he said.

The latest death was a policeman shot in a clash with "rioters" in the western city of Kermanshah.

Several people were also wounded and dozens arrested in the demonstrations that saw motorists block highways and others torch public property.

Washington condemned the use of "lethal force" against demonstrators, as well as "severe communications restrictions".

"The United States supports the Iranian people in their peaceful protests against the regime that is supposed to lead them," White House press secretary Stephanie Grisham said in a statement.

A 24-hour internet blackout in Iran appeared to have stemmed the flow of images shared on social media, with only officials' accounts and local news agencies still active.

Semi-official news agency ISNA said the protests had "mostly subsided" by Sunday evening, a report that could not be verified due to the online outage and limited news from agencies.

The petrol pricing plan was agreed by the High Council of Economic Coordination made up of the president, parliament speaker and judiciary chief.

Khamenei said that "I am not an expert and there are different opinions but I had said that if the heads of the three branches make a decision I will support it.

"Some people would definitely get upset over this decision... but damaging and setting fire (to property) is not something (normal) people would do. It is hooligans."

A lawmaker resigned Sunday to protest the decision which circumvented parliament, saying the presence of MPs was now "meaningless".

Access to the internet was restricted a day after the demonstrations broke out.

Netblocks, an internet monitoring website, tweeted Saturday that "Iran is now in the midst of a near-total national internet shutdown".

It came after a decision by the Supreme National Security Council, according to ISNA.

"Upon the decision of the Security Council of Iran and communicated to internet operators, access to internet has been limited as of last night and for 24 hours," it said, quoting an informed source at the information and communications technology ministry.

Some of the worst violence seen so far was in the central city of Sirjan, where acting governor Mohammad Mahmoudabadi said a civilian was killed and fuel stations were among the public property attacked and damaged.

In Kermanshah, a policeman died Sunday, a day after a "confrontation with a number of rioters and thugs," the provincial police chief told IRNA.

In Tehran on Saturday, protesters were seen burning tyres on a street and shouting slogans.

Similar scenes were witnessed in the cities of Shiraz, Isfahan and Bushehr, where security forces fired tear gas and water cannon at demonstrators.

Forty "disruptors" were arrested in the central city of Yazd after clashing with police, the province's public prosecutor told ISNA on Sunday. Most were not locals, he added.

Police said security forces would "not hesitate to confront those disrupting peace and security and will identify the ringleaders and field forces and confront them".

The intelligence ministry said those behind the unrest "have been identified" and that measures would be taken against them, according to ISNA.