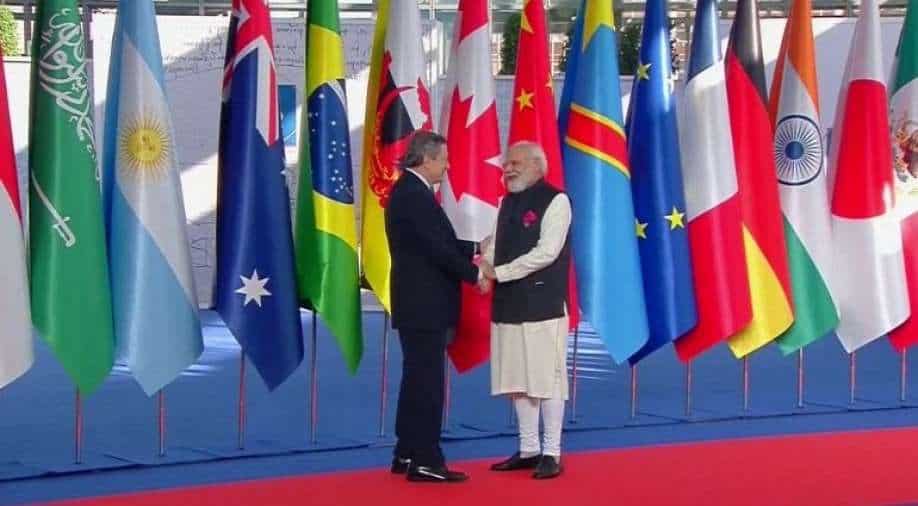 At a bilateral meeting on the sidelines of the G20 Leaders Summit at Rome, hosted by Italy in Rome on October 30-31, 2021, Modi and Draghi acknowledged the significant progress in bilateral relations since the adoption of the Action Plan for an enhanced Partnership between India and Italy on November 6, 2020

Prime Minister Narendra Modi and his Italian counterpart Mario Draghi on Saturday expressed their resolve to strengthen cooperation in the strategic sectors, including the cross-cutting issue of accelerating the clean energy transition to fight climate change, central to both the G20 Leaders Summit in Rome and the COP26 in Glasgow.

At a bilateral meeting on the sidelines of the G20 Leaders Summit at Rome, hosted by Italy in Rome on October 30-31, 2021, Modi and Draghi acknowledged the significant progress in bilateral relations since the adoption of the Action Plan for an enhanced Partnership between India and Italy on November 6, 2020.

They also recalled the India-EU Leaders Meeting held in Porto on May 8, 2021, where the European Union and India highlighted the urgency of addressing the interdependent challenges of climate change, biodiversity loss and pollution and agreed to deepen cooperation for accelerating the deployment of renewable energy, including deployment of innovative renewable technologies such as offshore wind energy and exploiting the potential of green hydrogen, promoting energy efficiency, developing smart grids and storage technologies, modernising the electricity market.

In addition, both sides agreed on the utmost importance of cost-effective integration of a growing amount of renewable energy into their respective power systems, as a key asset for an effective clean transition that generates jobs, GDP growth, reinforces universal energy access while eradicating energy poverty, a release from the Prime Minister's Office said in New Delhi.

In this perspective, the two Prime Ministers appreciated India's resolve to deploy 450 GW of renewable energy by 2030 as well as Italy's prompt ratification and active support to the International Solar Alliance. They agreed to launch a bilateral strategic partnership in the domain of energy transition, the statement said.

Such a partnership could build on existing bilateral mechanisms, including by giving new impetus to the cooperation on renewable energy and sustainable development between the Italian Ministry of Ecological Transition and its Indian counterparts, namely the Ministry of New and Renewable Energy, the Ministry of Power and the Ministry of Petroleum and Natural Gas.

The joint Statement read as follows: In order to promote their partnership in energy transition, Italy and India will

*Initiate a dialogue to support the development and deployment of green hydrogen and related technologies in India.

*Consider working together to support a large size green corridor project in India to capitalise on India`s target to produce and integrate 450 GW of renewable energy by 2030.