India-Afghanistan relationship seeks to prosper through all ups and downs 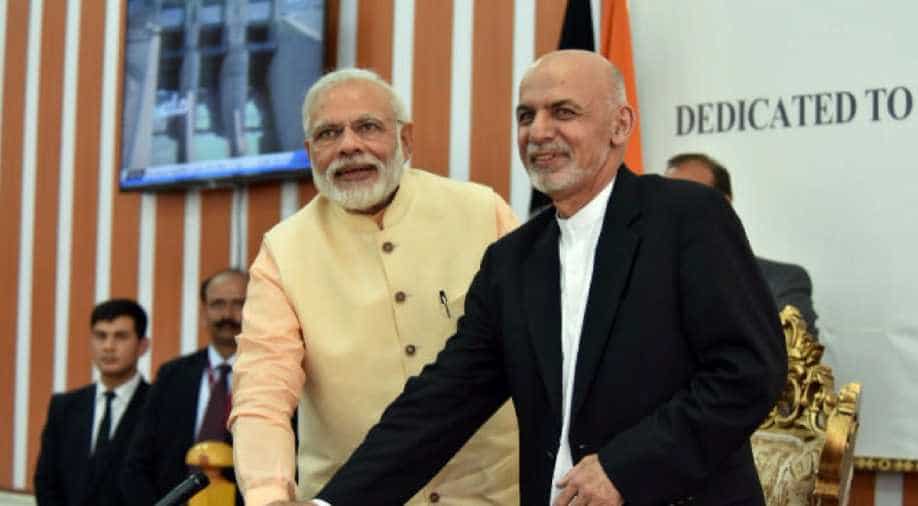 PM Modi with Ashraf Ghani the current president of Afghanistan. Photograph:( Others )

India-Afghanistan relations have come a long way in a short span of time. Arguably, no two other South Asian countries have a comparable strong bonding as these two. Not only is Afghanistan today seeking greater engagement with New Delhi, something which Afghanistan President Ashraf Ghani re-emphasised during his recent visit to India but even the US is calling upon India to play a larger role there (as is evident in Washington DC’s recently unveiled Afghanistan and India policies).

Given that India’s contribution so far has been largely in the areas of developmental work and somewhat limited in defence matters, it is evident that both the Trump administration and Kabul are expecting New Delhi to ramp up Indo-Afghan defence cooperation even if it leaves Pakistan rattled. India is unlikely to put its military boots on the ground there, but short of that, the sky appears to be the limit.

Afghanistan had opposed the entry of Pakistan into the United Nations, and also that Kabul had not officially recognised the Durand Line which divides Afghanistan from Pakistan and serves as the de facto border.

Such is the current euphoria, admittedly justifiable, that few would remember or want to remember that the two nations had not seen eye to eye on many issues critical to New Delhi in the recent past. This, despite the emotional Kabuliwala, connect, the fact that Afghanistan had opposed the entry of Pakistan into the United Nations, and also that Kabul had not (it still has not) officially recognised the Durand Line which divides Afghanistan from Pakistan and serves as the de facto border.

The first real indication came during the 1965 India-Pakistan war. New Delhi had then raised the pitch to counter Pakistan’s call for people’s right to self-determination in Jammu & Kashmir and even Nagaland. It said that Pakistan must then agree to self-determination in East Pakistan, Balochistan and 'Pakhtoonistan’. Kabul ought to have been happy with that remark given that it believes that the Pakhtun-dominated regions had wrongly gone to Pakistan as a result of the Durand divide. Yet, Afghanistan did not back India during the war.

In fact, Kabul had registered an official protest against the Indian forces for targeting Peshawar and Kohat. This may be explained away on the pretext that Afghanistan considered the two as being its part. But then it had until then done nothing to forcefully present its case before the international community.

Pakistan’s penchant to damage India’s relations with Afghanistan and play mischief to achieve that end, something that it continues to indulge in even today.

In an interview, senior Indian diplomat Chinmaya Gharekhan had said that Afghanistan “never sided with India in India’s disputes with Pakistan… on issues like Kashmir, we have not had any support from Afghanistan”.

It must be said here that given Pakistan’s penchant to damage India’s relations with Afghanistan and play mischief to achieve that end - something that it continues to indulge in even today - it may have ‘manufactured’ the statement purportedly given by the king. Yet, it’s a fact that Kabul was less than favourable to New Delhi on the latter’s position on Kashmir.

It is possible that the Indian dismay would have been addressed had the then Prime Minister Lal Bahadur Shastri made his scheduled visit to Afghanistan after the Tashkent meet which brought about an end to the 1965 war. Unfortunately, that was not to be as he died soon after the Tashkent Declaration.

In those days, 1965 was the only ‘bright’ spot in Afghanistan-Pakistan relations, because soon after, especially from the early 1970s, the Afghans began to be increasingly alarmed by Pakistan’s high-handedness in East Pakistan and even the Baloch region. Although Kabul officially maintained silence over the Pakistani Army’s atrocities in what later became Bangladesh, the ruling dispensation recognised the general Afghan anger over the developments.

What was worse from Afghanistan’s viewpoint was the heavy-handedness which Pakistan displayed against the Baloch population. Kabul and New Delhi, although not the greatest of friends then, nevertheless began coming closer through, the increased Soviet influence in Afghanistan. Ironically, it was that very influence, to counter which the US entered the scene and made Pakistan a key counter-balance to the Soviet-backed regimes, which led to complications in the bilateral. Towards the end of 1980s and the early 1990s with the Soviets out and the Taliban gaining ground, India-Afghanistan ties hit a new low, only to recover years later.

Afghanistan soon realised to its dismay that the ouster of the Taliban regime had brought more problems than it had solved, in the form of militancy. The Mujahideen were out of work and had turned against their patrons - the US - but continued to be backed by Islamabad. The militant's groups, now carrying various names, began to target not just Afghanistan but also India and others in South Asia. India-Afghanistan ties should have taken off after this realisation had dawned on Kabul, but did not.

Hamid Karzai consistently attacked Pakistan for patronising terror elements that hit his country and India too.

This was primarily because of two reasons. The first is that the US continued to generously support Pakistan, and Afghanistan had to humour Pakistan because it heavily depended on the US for all kinds of aid. The second is that the new regime in Kabul fell for Pakistan’s assurance of being a true friend. In 2011, then President Hamid Karzai had called Pakistan a “twin brother” and claimed that it had suffered from terrorism “more than us” and that India suffered from terrorist attacks “only occasionally”.

The fact that Karzai called India a “great friend” did nothing to please New Delhi after his pro-Pakistan remarks. It didn’t take him a lifetime to revise his opinion. By 2014, when he was no longer President, he was consistently attacking Pakistan for patronising terror elements that hit his country and India too. This was then the beginning of Kabul getting real close to India. To be fair to Karzai, towards the last months in office, he had begun to speak out openly against Pakistan-sponsored terror in the region.

Like his predecessor, President Ghani began his tenure with overtures to Islamabad, worrying New Delhi which had begun to see light at the end of the India-Afghanistan bilateral tunnel. He went to Pakistan, received a 21-gun salute at the airport, and visited the Pakistani military headquarters - a gesture that was seen as bending-over-backwards to the powerful army there and thus roundly criticised. But he too was soon to be disabused of his optimism. In subsequent months, he realised Pakistan’s games, and turned into Islamabad’s trenchant critic and forged what is now termed as a historic relationship with India.

Given this short history, it would not be an exaggeration to say that the robust India-Afghanistan bilateral has much to thank Pakistan for its duplicity in combating terrorism in the South Asian region. But the relationship cannot rest on the negativity over Islamabad; it needs fresh positive doses to prevent any more disruptions.