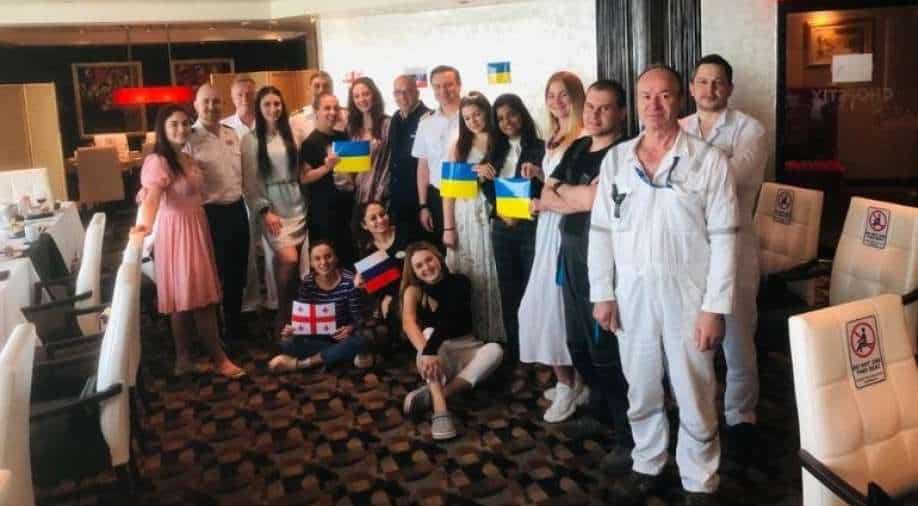 20 Ukrainian crew members of Empress Cordelia Cruise have been performing to the best of their abilities. Photograph:( WION )

In all, there are over 600 crew members of different ethnicities onboard the ship. The Ukrainian crew members are working along with Russian staff too as one big family

At a time when Russian forces are advancing unabatedly with the help of heavy bombardment, several Ukrainian citizens have been forced to take refuge in bomb shelters.

And many citizens of the country, who are abroad for various reasons, are going through a difficult phase of life as they are worried about their families and friends back home.

One such example is the 20 Ukrainian crew members of Empress Cordelia Cruise, which includes the captain of the ship. The vessel is sailing from Mumbai on Saturday.

Also Read: At ICJ, Ukraine and Russia to fight again but over ‘genocide claim’

Natalie, the lead performer of the ship, is worried about her parents, who live close to Kyiv. They have also taken shelter in a bunker to escape bombardment.

Even in this tense situation, all the crew members have been performing to the best of their abilities.

In all, there are over 600 crew members of different ethnicities onboard the ship. The Ukrainian crew members are working along with Russian staff too as one big family.

Before the ship set sail, the crew members had a group lunch and a minute of silence for families, who are affected.

“We are all one big family and are staying together. People are worried because the situation is serious in Ukraine but it is the support that is being provided by the company that is helping all of us,” said the captain of the cruise, Denis Korop.

Cordelia Cruise CEO Jargon Bailom said that they are ensuring that these crew members stay connected with their families by arranging calls on a daily basis and any kind of monetary help that is possible.