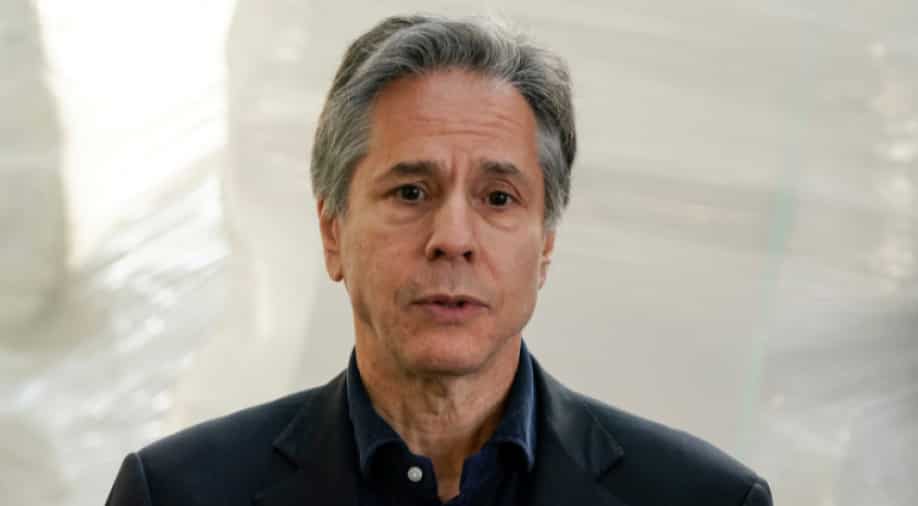 US Secretary of State Antony Blinken listens as Secretary of Defense Lloyd Austin speaks with reporters after returning from their trip to Kyiv, Ukraine, and meeting with Ukrainian President Volodymyr Zelensky Photograph:( AFP )

The United States has also announced a new assistance worth $713 million for Zelensky's government, the gradual return of its diplomats to Ukraine along with the nomination of a new ambassador

US Secretary of State Antony Blinken on Monday (April 25) said that Russia is failing in its war aims, whereas Ukraine is succeeding.

According to him, ''In terms of Russia's war aims, Russia has already failed and Ukraine has already succeeded.''

His statement came after he and US Defence Secretary Lloyd Austin met Ukrainian President Volodymyr Zelinsky.

The meeting between the American and the Ukrainian officials in Kyiv lasted for three hours instead of an allotted 90 minutes.

The United States has also announced a new assistance worth $713 million for Zelensky's government, the gradual return of its diplomats to Ukraine along with the nomination of a new ambassador.

Zelensky had been asking all countries across the globe for military and humanitarian assistance to combat Russian forces.

Meanwhile, Austin said that "The first step in winning is believing that you can win. And so they believe that we can win."

"We believe that we can win, they can win if they have the right equipment, the right support," he added.

Also read | Russia has designs to capture other countries after Ukraine, says Zelensky

As per Austin, Washington hopes the Russian invasion of Ukraine will exhaust it to such an extent that it will not attack any other country.

"We want to see Russia weakened to the degree that it can't do the kinds of things that it has done in invading Ukraine," he said.

Other than Blinken and Austin, leaders of several NATO countries have also visited Ukraine and pledged their support and vowed to provide weapons.

Russian President Vladimir Putin calls his attack on Ukraine a ''special military operation'' to ''demilitarise'' and ''denazify'' the country.

Ukrainian presidential adviser Oleksiy Arestovych has said, "We invited Russians to hold a special round of talks on the spot, right next to the walls of Azovstal."

However, he did not receive any response from Russia and it continues its assault on the sprawling Azovstal steel plant. Ukrainian soldiers were soldiers out at the plant.

Calling for an "immediate stop" to fighting in Mariupol, Ukraine crisis coordinator Amin Awad said, "The lives of tens of thousands, including women, children and older people, are at stake in Mariupol."

"We need a pause in fighting right now to save lives," Awad added.

"We will not have time to wait for a military solution to the situation, the situation is very critical. Very heated. I don't know how much time we have," said Ukrainian commander Sergey Volyna.