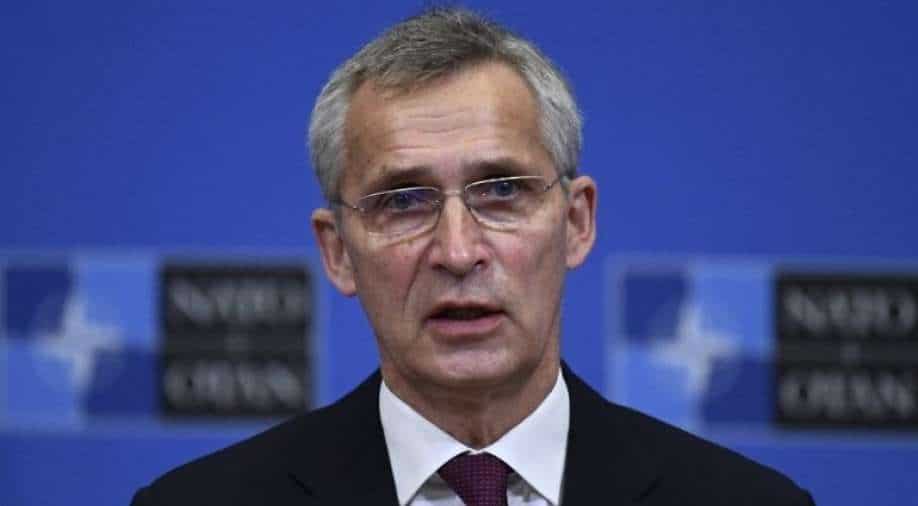 NATO Secretary General Jens Stoltenberg speaks during a joint press conference with Ukraine's Deputy Prime Minister for European and Euro-Atlantic Integration after their bilateral meeting at the NATO headquarters in Brussels Photograph:( AFP )

While Denmark is sending a frigate to the Baltic Sea and deploying F-16 warplanes to Lithuania, Spain will be sending ships to join NATO's standing maritime force, said NATO

In what comes as a move to enhance defence, NATO on Monday said that it will be sending extra force, including ships and fighter jets, to eastern Europe as Russia continues to build up its troops near Ukraine. Several member countries of NATO have offered troops and equipment.

While Denmark is sending a frigate to the Baltic Sea and deploying F-16 warplanes to Lithuania, Spain will be sending ships to join NATO's standing maritime force, said NATO.

France is also ready to send its troops to Bulgaria.

NATO Secretary-General Jens Stoltenberg said in a statement said that the 30-country military organization is all set to take all the required measures to protect and defend the allies. This includes reinforcing the eastern part of the Alliance.

Earlier, a senior British minister said that Russia would face severe economic sanctions if it installs a puppet regime in Ukraine.

US and NATO have repeatedly voiced concerns over Russia’s plan to invade Ukraine, a charge that Kremlin denies. However, there have been various reports, citing satellite images, indicating that Russia has amassed thousands of troops near the Ukrainian borders.

Earlier, Blinked had slammed Russia for justifying its troop build near Ukrainian borders. He also said that the NATO alliance is prepared to respond forcefully to any Russian aggression.