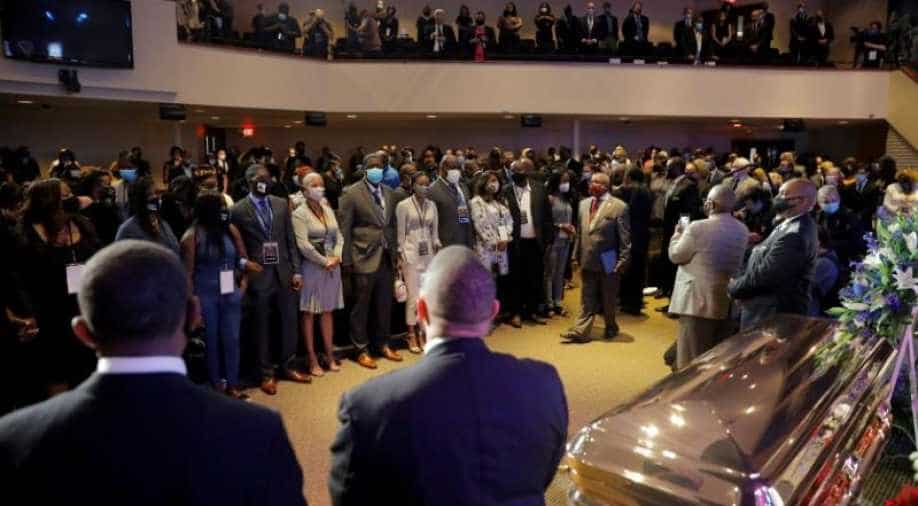 Hundreds of mourners in Minneapolis on Thursday remembered George Floyd, the black man whose death in police custody set off a wave of nationwide protests and ignited a debate about racial justice.

Services for Floyd are expected to stretch across six days and three states, including memorials in North Carolina and Houston. A funeral is planned for Tuesday.

At the memorial service inside a university chapel in Minneapolis, prominent civil rights activist the Rev. Al Sharpton told mourners that George Floyd's fatal encounter with police and the nationwide protests his death ignited marked a reckoning for America over race and justice, demanding, "Get your knee off our necks."

"George Floyd should not be among the deceased. He did not die of common health conditions. He died of a common American criminal justice malfunction," Sharpton said. "It's time for us to stand up in George's name and say, 'Get your knee off our necks.'"

Sharpton led mourners in eight minutes and 46 seconds of silence, the amount of time Floyd lay on a Minneapolis street with a knee pressed into his neck.

Philonise Floyd, one of Floyd's brothers, told the memorial service that their family was poor, and that he and George would wash their socks and clothes with soap in the sink and dry them in the oven because they did not have a dryer.

“It’s crazy man, all these people came to see my brother, it’s amazing he touched so many hearts,” said the brother, wearing a dark suit and a badge with a photo of his brother and the words "I can't breathe" on his lapel.

A second brother, Terrence Floyd, joined an outdoor memorial in a Brooklyn park, where many in the crowd knelt in the grass in the afternoon sunshine in a symbol of protest and chanted, "No justice, no peace."

He urged the crowd to continue to seek justice but to avoid violence, saying, "My brother wasn't about that."

Derek Chauvin, 44, was fired from the Minneapolis police force and charged with second-degree murder after being filmed in a widely circulated video kneeling on Floyd's neck for nearly nine minutes as Floyd gasped for air and repeatedly groaned, "Please, I can't breathe."

Police say they suspected Floyd, 46, of using a counterfeit bill to pay for cigarettes.

Huge crowds have since defied curfews and taken to the streets of cities across the country for nine nights in sometimes violent protests that prompted President Donald Trump to threaten to send in the military.

Ben Crump, a lawyer for Floyd's family, told the memorial service that the police action that day was evil.

Many knelt in the grass in the afternoon sunshine in a symbol of protest against police behavior and chanted, "No Justice. No Peace."

US Representative Hakeem Jeffries urged people to continue their protests, saying the tragedy has awakened a cross-section of people who would bring lasting change.

In addition to hundreds who gathered inside the North Central University chapel, a crowd of hundreds more clustered outside under trees and in window sills, listening to the service broadcast over loudspeakers.

The prayer service, which drew comic actors Kevin Hart and Tiffany Haddish as well as US Senator Amy Klobuchar of Minnesota, coincided with a separate memorial tribute to Floyd in the New York City borough of Brooklyn, a major flashpoint of protests in recent days.

On Thursday, the three newly arrested officers - Thomas Lane, J Alexander Kueng and Tou Thao - made their first appearance in court and were ordered to remain held on $750,000 bond each.

Their principal co-defendant, Derek Chauvin, is slated to appear for his bond hearing on Monday.

The four former officers, all dismissed from the Minneapolis police department the day after their deadly confrontation with Floyd, each faces a maximum sentence of 40 years in prison if convicted of the most serious charges against them.