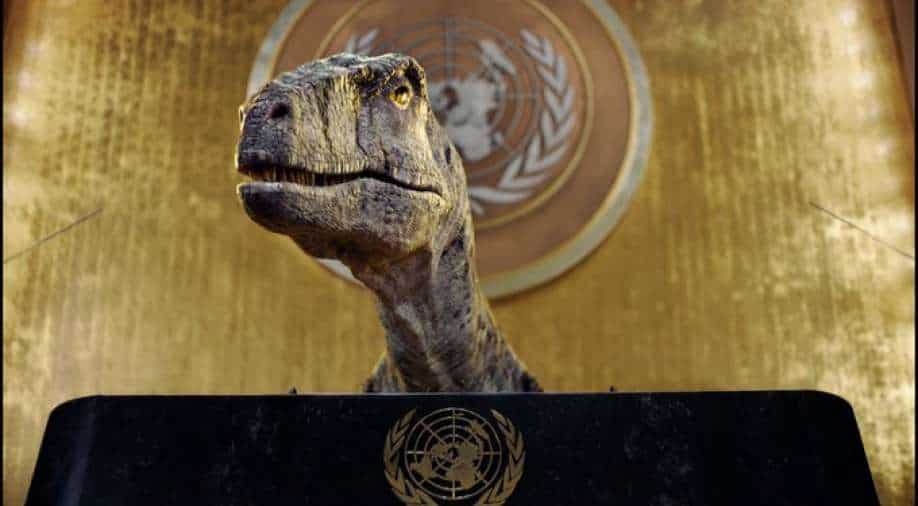 As Cop26 is set to begin in a few days, the United Nations Development Programme released a video of Frankie, the talking dinosaur, in an attempt to warn the world about climate disasters.

The dinosaur urged the world not to choose extinction.

"You're headed for a climate disaster, and yet every year governments spend hundreds of billions of public funds on fossil fuel subsidies. Think of all the other things you could do with that money. Around the world, people are living in poverty. Don't you think helping them would make more sense than paying for the demise of your entire species?", the dinosaur said, standing at the podium of the UN General Assembly.

"We can’t ignore climate change any longer. Unless we end the excuses, we’ll be another species facing extinction," said UNDP as they published the video of the dinosaur.

We can’t ignore #ClimateChange any longer. Unless we end the excuses, we’ll be another species facing extinction.

Join us and @FrankieTheDino, and let's take #ClimateAction before it’s too late: https://t.co/vf7PQ2oLeR#DontChooseExtinction #COP26 pic.twitter.com/lwAXw4FCYI

Meanwhile, the UK president-designate of the Cop26 talks, Alok Sharma, has said that achieving a global climate deal in Glasgow will be harder than signing the Paris agreement of 2015.

Sharma was quoted by The Guardian as saying, "What we’re trying to do here in Glasgow is actually really tough."

“It was brilliant what they did in Paris, it was a framework agreement, a lot of the detailed rules were left for the future."

“It’s like, we’ve got to the end of the exam paper and the most difficult questions are left and you’re running out of time, the exam’s over in half an hour and you go, ‘How are we going to answer this one?'

Also, world’s top carbon emitters are now urging the rich countries to do more to finance the developing world’s transition away from fossil fuels.