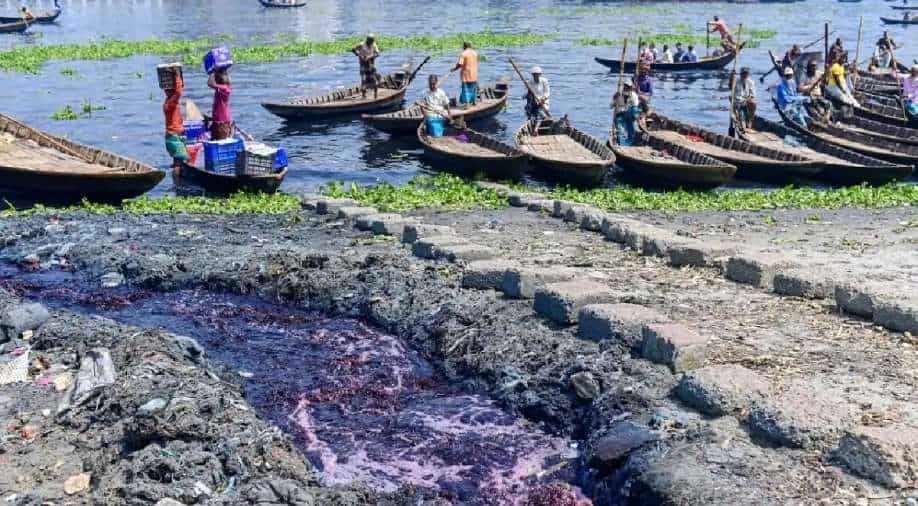 How Bangladesh's rivers have paid the price for garment-driven economic boom Photograph:( AFP )

The study also found traces of phenol, ammonia and other chemicals used in fabric dyeing which are extremely corrosive in nature and even turn fatal for the marine life in the Bangladeshi rivers.

The Bangladesh economy has grown at a healthy rate in the last few decades with the garment trade contributing for the majority of it. The booming industry accounts for around 80 per cent of Bangladesh’s annual exports and as a result, they have gone ahead of neighbours India when it comes to per capita income. However, this growth has come at a huge cost – the environment.

The rivers of Bangladesh have borne the brunt of development as the constant dumping of dyes, tanning acids and other chemicals has caused serious environmental damage. The toxicity of the rivers has started affecting citizens who are suffering from various skin conditions and according to AFP, an expert went to the extent of calling the Buriganga river “the largest sewer of the country”.

"It is now the largest sewer of the country," said Sheikh Rokon, the head of the Riverine People environmental rights group. "For centuries people built their homes on its banks to bask in the river breeze. Now the smell of toxic sludge during winter is so horrible that people have to hold their noses as they come near it,” he said about the condition of the river, according to the AFP report.

A paper by the government’s River Research Institute found the levels of chromium and cadmium in the country’s rivers are over six times that of the normal level. These are elements found in chemicals used in the garment industry and according to WHO, extremely dangerous for humans.

The study also found traces of phenol, ammonia and other chemicals used in fabric dyeing which are extremely corrosive in nature and even turn fatal for the marine life in the Bangladeshi rivers.