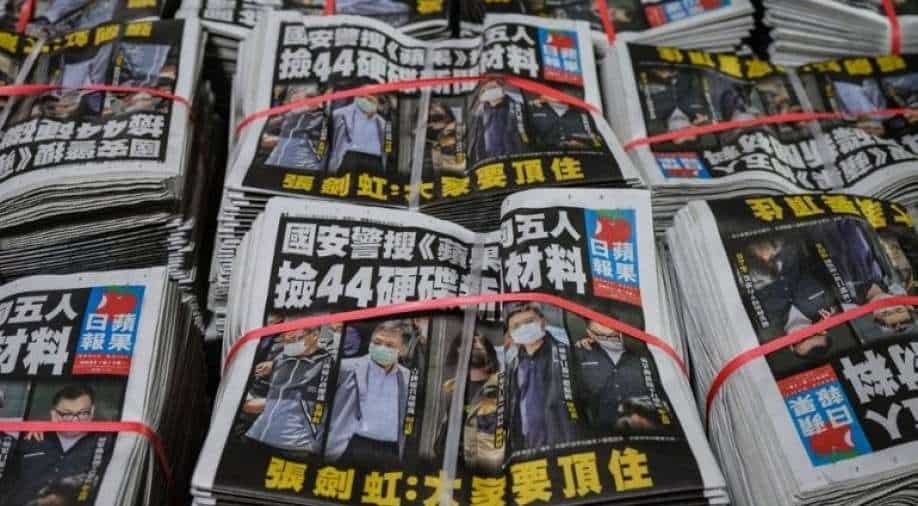 The closure of the popular tabloid, which mixes pro-democracy views with celebrity gossip and investigations of those in power, marks the end of an era for media freedom in the Chinese-ruled city, critics say.

Hong Kong's most vocal pro-democracy newspaper, Apple Daily, printed its last edition on Thursday after a stormy year in which its tycoon owner and other staff were arrested under a new national security law, and its assets were frozen.

The closure of the popular tabloid, which mixes pro-democracy views with celebrity gossip and investigations of those in power, marks the end of an era for media freedom in the Chinese-ruled city, critics say.

"Thank you to all readers, subscribers, ad clients and Hong Kongers for 26 years of immense love and support. Here we say goodbye, take care of yourselves," the paper said in an online article.

Hundreds of supporters gathered outside Apple Daily's building on Wednesday night to show support, sometimes in heavy rain, and waved smartphone lights. Journalists came out onto the balcony and responded with their own phones.

The last front page carried a photograph of a member of staff waving at supporters, with the headline "Hong Kongers bid a painful farewell in the rain".

A Reuters reporter present in the Apple Daily newsroom saw dozens of journalists break into applause once the final edition was sent to press, and some in tears.

Reporter Alvin Chan went outside to distribute free copies to the supporters, saying: "I hope everyone can ... continue to believe in our values."

The paper, whose online version will also stop updating, said it was printing a million copies of its last edition - more than 10 times its normal print run.

Shortly after midnight, some newsstands waiting for delivery already had hundreds of people queueing.

Apple Daily's support for democratic rights and freedoms has made it a thorn in Beijing's side since owner Jimmy Lai, a self-made tycoon who was smuggled from mainland China into Hong Kong on a fishing boat at the age of 12, started it in 1995.

It shook up the region's Chinese-language media landscape and became a champion of democracy on the margins of Communist China. Its demise leaves only a handful of small online outlets on that side of politics, including Stand News and Citizen News.

Staff unions at Citizen News and six other media groups said they would wear black on Thursday in protest at what they described as "the government’s blow against freedom of the press". Management at Citizen News and Stand News could not be reached for comment.

Apple Daily's supporters championed it as a beacon of media freedom in the Chinese-speaking world. It repeatedly challenged Beijing's authoritarianism and was read by dissidents and a more liberal Chinese diaspora.

Lai, whose assets have been frozen, has been in jail since December on charges, stemming from pro-democracy protests, of taking part in unauthorised assemblies.

Some rights groups, media organisations and Western governments have criticised the action against the newspaper.

Hong Kong leader Carrie Lam said on Tuesday that criticism of the raid on the newspaper amounted to attempts to "beautify" acts that endangered national security. Chinese officials have denounced the criticism as interference.

Hong Kong and mainland officials have repeatedly said that media freedoms are respected but are not absolute.

Apple Daily, which was published by Next Digital and employed hundreds of journalists, said in its online article that the decision to close was "based on employee safety and manpower considerations".

Since being raided by police, the newspaper says it has suffered mass resignations and entire departments have had to close.

Last week, the assets of companies linked to the newspaper were frozen and five executives were arrested. On Wednesday, police arrested a columnist on suspicion of conspiring to collude with foreign forces.

Apple Daily and Next Digital management could not be reached to comment further.

In an interview with Reuters, an adviser to Lai said on Monday that the paper would close "in a matter of days".

The paper's newsroom was raided by about 200 police last August, when Lai was arrested on suspicion of colluding with foreign forces, and again last week, by 500 police, when the other executives were detained.

On both occasions, the paper said it had increased its print run to 500,000 the following day from the usual 80,000, and residents of the city of 7.5 million snapped it up before dawn.

The police action was the most direct attack on Hong Kong's freewheeling media since Beijing regained control of the city in 1997.

Authorities in Hong Kong have said the moves against Apple Daily were not targeting the media industry or press freedom.

The security law imposed on the city last year as Beijing's first major move to put Hong Kong on a more authoritarian path.

Lam and other pro-Beijing officials have said it has restored stability after months of often violent pro-democracy protests.

The Taiwan arm of Apple Daily said it would continue to publish online, as its finances are independent.

Apple Daily has come under increasing pressure since Lai was arrested last year under the security legislation.

Authorities have said dozens of Apple Daily articles may have violated the security law, the first instance of authorities taking aim at media reports under the legislation.

Next Digital has been kept afloat by loans from Lai. In May, Reuters reported exclusively that Hong Kong’s security chief had sent letters to branches of HSBC and Citibank threatening up to seven years’ jail for any dealings with the billionaire's account in the city.