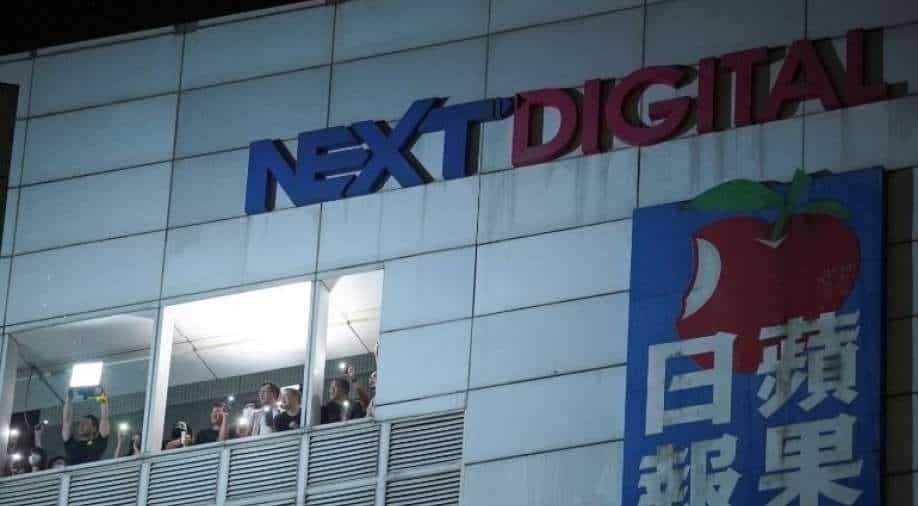 Staff light their phone flashlights and wave to supporters at the headquarters of the Apple Daily newspaper, and its publisher Next Digital, after the announcement it will print its last edition, in Hong Kong, China June 23, 2021. (File Photo) Photograph:( Reuters )

The company is the publisher of Apple Daily, a popular pro-democracy newspaper in Hong Kong that closed last week

According to an internal memo seen by Reuters, Hong Kong media group Next Digital, owned by jailed tycoon Jimmy Lai, will cease operating from July 1 after the company's assets were frozen as part of a national security investigation.

Next Digital did not immediately respond to a request for comment.

The company is the publisher of Apple Daily, a popular pro-democracy newspaper that closed last week after its newsroom had been raided by 500 police officers investigating whether some articles breached the security law.

Beijing imposed the legislation in Hong Kong on June 30, 2020. It punishes acts deemed by China to be subversive, secessionist, terrorism or collusion with foreign forces with up to life in prison.

Critics say it has been used to crush dissent, while its supporters said it has restored order in Hong Kong after months of pro-democracy protests.

The Next Digital memo, shared separately by two employees, said assets linked to the company remained frozen under the national security investigation.

Dated June 30, the memo was addressed to all Hong Kong staff from the board.

Also read | A year of Hong Kong security law: Crackdown on people and the press

"The group will cease operations," it said. "Although the road ahead is difficult, continue to move forward!"

The Hong Kong Security Bureau, which directed the asset freeze, did not immediately respond to a request for comment.

Lai, a staunch Beijing critic, was arrested last year on suspicion of colluding with foreign forces. He is currently serving a prison sentence for taking part in illegal assemblies during Hong Kong's mass 2019 pro-democracy protests.

Also read | One year into contentious security law, Hong Kong has made 117 arrests

Next Digital, which had a market capitalisation of HK$765 million ($98.52 million), said in a statement to the Hong Kong Stock Exchange on Tuesday that it had accepted a proposal to divest Amazing Sino, which operates the online edition of Taiwan's Apple Daily.

It had earlier ceased printing its Taiwan edition on the democratic island, which China views as a breakaway province, blaming declining advertising revenue and difficult business conditions in Hong Kong linked to politics.