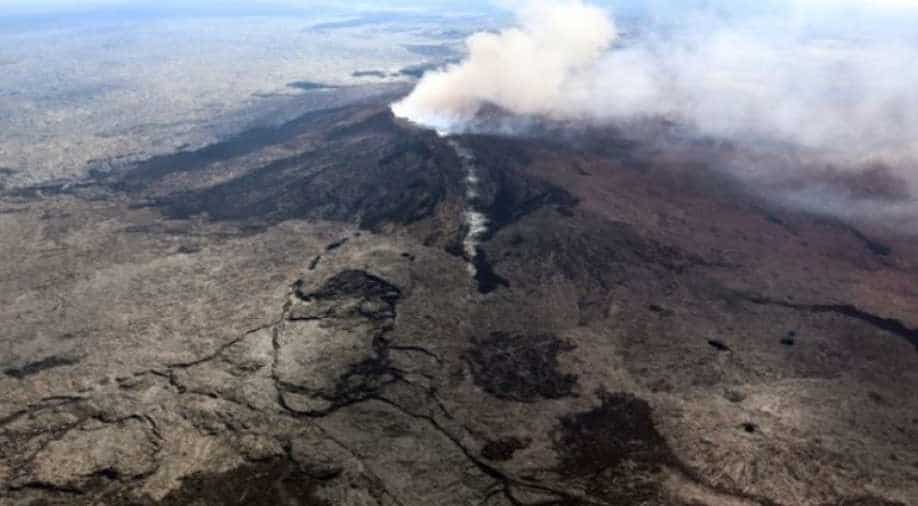 The Kilauea Volcano fissure that formed on the west flank of the Pu'u 'O'o cone (line of white steam) is seen in this aerial image after the volcano erupted following a series of earthquakes over the last couple of days, in Hawaii, US on May 3, 2018. Photograph:( Reuters )

Scientists and local officials warned residents that seismic and volcanic activity may continue after a 6.9 tremor shook buildings on the island's southeast corner a little afternoon on Friday

&nbspHawaii's Big Island remains on high alert on Saturday after the Kilauea volcano spewed lava into residential areas, forcing hundreds to evacuate, and a series of earthquakes, included a powerful tremor, shook the island.

Scientists and local officials warned residents that seismic and volcanic activity may continue after a 6.9 tremor shook buildings on the island's southeast corner a little after noon (2200 GMT) on Friday and more lava fissures were reported in a residential subdivision, where residents have been ordered to leave.

"Until we see earthquake activity dying down and the ground stops moving, it's likely that this activity is going to continue," said Tina Neal, a scientist in charge at the USGS Hawaii Volcano Observatory after a community meeting attended by about 300 people on Friday.

Some attendees shed tears as they asked officials about looting, travel restrictions and safety precautions at the Puna Geothermal Venture, a power plant in the eruption area.

"Today’s been a challenging day for everyone," Neal said.

The meeting came hours after the 6.9 tremor caused buildings to shake at the Community Center in Pahoa town, one of two evacuation centers in the area hastily set up after lava started burbling up through fissures in the ground in neighborhoods nearby.

Friday also saw several more eruptive lava fissures, each several hundred yards long, in the Leilani Estates subdivision in the Puna District about a dozen miles (19 km) from the volcano.

The Hawaii County Civil Defense Agency said in an alert that a total of six fissures had occurred. Although no significant lava flows have yet formed, additional outbreaks of lava, which can reach temperatures of about 2,100 degrees Fahrenheit (1,150 Celsius), were expected, the agency said.

Kilauea, one of the world's most active volcanoes and one of five on the island, has been in constant eruption for 35 years. Lava flows from the volcano have covered 48 square miles (125 square km), according to the U.S. Geological Survey. Scientists say it is nearly impossible to predict how long an eruption will last.

On Thursday, Kilauea began spewing lava into residential areas after a series of earthquakes over the past week. Starting around 11 a.m. on Friday, the island experienced a flurry of earthquakes, culminating in the massive magnitude 6.9 tremor.

Some 1,700 residents in Leilani Estates and Lanipuna Gardens subdivisions were ordered to evacuate on Thursday after public works officials reported steam and lava erupting from fissures in the road, the Civil Defense agency said.

Civil defense officials have warned the public about high levels of sulfur dioxide near the volcano, one reason for the evacuation orders. The gas can cause skin irritations and breathing difficulties.