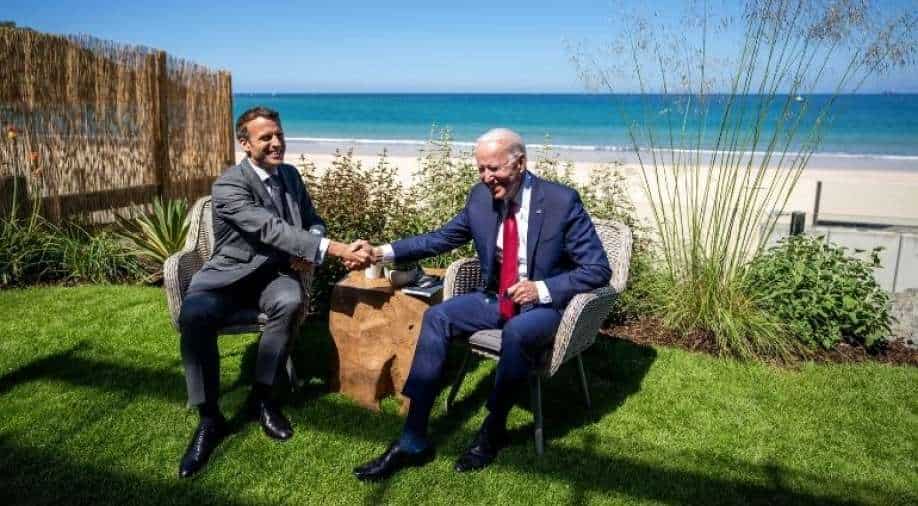 Macron's decision was a stunning and unexpected escalation of the breach between Washington and Paris, on a day that the two countries had planned to celebrate an alliance that goes back to the defeat of Britain in the Revolutionary War

The United States and Australia went to extraordinary lengths to keep Paris in the dark as they secretly negotiated a plan to build nuclear submarines, scuttling France’s largest defense contract and so enraging President Emmanuel Macron that on Friday he ordered the withdrawal of France's ambassadors to both nations.

Macron's decision was a stunning and unexpected escalation of the breach between Washington and Paris, on a day that the two countries had planned to celebrate an alliance that goes back to the defeat of Britain in the Revolutionary War.

Yet it was driven by France's realization that two of its closest allies have been negotiating secretly for months. According to interviews with U.S. and British officials, the Australians approached the new administration soon after President Joe Biden's inauguration and said they had concluded that they had to get out of a $60 billion agreement with France to supply them with a dozen attack submarines.

The conventionally powered French subs, the Australians feared, would be obsolete by the time they were delivered. They expressed interest in seeking a fleet of quieter nuclear-powered submarines based on American and British designs that could patrol areas of the South China Sea with less risk of detection.

But it was unclear how they would terminate the agreement with France, which was already over budget and running behind schedule. "They told us they would take care of dealing with the French," one senior U.S. official said.

The Australians knew they had a receptive audience. Biden, who has made pushing back hard on China's territorial ambitions a central tenet of his national security policy, told aides those French-made submarines would not do. They did not have the ability to range the Pacific and show up unexpectedly off Chinese shores — adding an element of military advantage for the West.

The Australians, by all accounts, never made clear to the French that they were preparing to cancel the deal, which had taken years to negotiate. And in meeting after meeting with their French counterparts — some including Biden and Secretary of State Antony Blinken — the Americans did not give France a heads-up about their plans to step in with their own designs, the officials said, asking for anonymity to discuss sensitive diplomacy. It was a classic case of diplomatic avoidance.

Biden's top aides finally discussed the issue with the French hours before it was publicly announced at the White House in a virtual meeting with Biden, Prime Minister Boris Johnson of Britain and Prime Minister Scott Morrison of Australia.

The result was a blowup that has now led to a vivid breach of trust with one of America's oldest allies.

In the end, Biden's decision was the result of a brutal calculus that nations sometimes make in which one ally is determined to be more strategically vital than another — something national leaders and diplomats never like to admit to in public. And it was a sign that as Biden begins to execute what the Obama administration, 12 years ago, called the "pivot to Asia," there is the risk of stepping on political land mines as old, traditional allies in Europe feel left behind.

"As much as the pivot has been described as pivoting to Asia without pivoting away from someplace else, that is just not possible," Richard Fontaine, CEO of the Center for a New American Security, who has long ties to both the Australian and American players in the deal, said Wednesday. "Military resources are finite. Doing more in one area means doing less in others."

It also apparently means hiding negotiations from some of your closest allies.

By the time the Biden administration began engaging Australia and Britain seriously about its emerging strategy to counter China, a three-year-old contract worth $60 billion or more for a dozen submarines, to be constructed largely by the French, was already teetering, U.S. officials said. The submarines were based on a propulsion technology that was so limited in range, and so easy for the Chinese to detect, that it would be obsolete by the time the first submarines were put in the water, perhaps as long as 15 years from now.

There was an obvious alternative, the kind of nuclear-powered submarines deployed by the Americans and the British. But U.S. and Australian officials agreed that if the French caught wind of the fact that the plug was going to be pulled on one of the biggest defense contracts in their history, they almost certainly would try to sabotage the alternative plan, according to officials who were familiar with the discussions between Washington and Canberra.

So they decided to keep the work to a very small group of officials and made no mention of it to the French, even when Biden and Blinken met their French counterparts in June.

Biden made no mention of the plans during a chummy chat with Macron at a summit meeting in June in Cornwall, where they sat in lawn chairs by the sea and talked about the future of the Atlantic alliance. (Biden, Johnson and Morrison met together the same day, discussed the emerging deal, and in a vague statement which seems more revealing today than it did then, referred to "deepening strategic cooperation between the three governments" to meet a changing defense environment in the Indo-Pacific.) Three days later, Morrison met separately with Macron but left no impression he was rethinking the deal, the French insist.

According to French officials, Blinken also stayed silent June 25 when his French counterpart, Jean-Yves Le Drian, welcomed him back to Paris — where Blinken spent his high school years — and extolled the importance of the French submarine deal.

And as recently as Aug. 30, when the French and Australian defense and foreign ministers held their annual “consultation,” they issued a joint communiqué that said the two countries were committed to deepening cooperation in the defense industry and "underlined the importance of the Future Submarine program."

By that time, the Australians not only knew the program was dead; they had nearly sealed the agreement in principle with Washington and London.

The French ambassador to the United States, Philippe Étienne, said in several interviews that he first heard of the deal in leaked news reports appearing in the Australian media and in Politico. Other French officials said they had been suspicious that something was up a week ago but did not get an immediate response from Blinken or Secretary of Defense Lloyd Austin. The first U.S. official to discuss the details with Étienne was Jake Sullivan, the national security adviser, a few hours before the public announcement Wednesday.

The Chinese government also did not get a heads-up, no surprise since the official U.S. position is that the submarine deal is not aimed at any particular nation. But China’s first response to the new alliance, awkwardly named AUKUS (for Australia, the United Kingdom and the United States), was that it was "extremely irresponsible" and would start an arms race. In fact, the Pentagon’s most recent China report says the Chinese navy has built a dozen nuclear subs, some of which can carry nuclear weapons. Australia has vowed never to deploy nuclear weapons.

Even before Macron recalled the ambassadors, Biden’s aides seemed taken aback by the ferocity of the French response, especially Le Drian’s characterization that it was a "knife in the back." They have suggested the French were being overly dramatic and believe the two countries will gradually return to normal relations. History suggests they may be right: A huge breach prompted by the British and French invasion of the Suez Canal in 1956 was eventually papered over, as was the "Nixon Shock" with the Japanese in 1971, when the United States gave no notice about its decision to come off the gold standard.

In this case, U.S. officials said the decision to toss over the existing French-Australian contract, and replace it with one that would bind Australia technologically and strategically to the nuclear submarine program, generated virtually no internal debate, participants said. The reason was straightforward: In the Biden White House, the imperative to challenge China’s growing footprint, and its efforts to push the U.S. Navy east, to the next island chain in the Pacific, reigns supreme.

"It says a lot about how Washington discerns its interests in the Pacific," said Fontaine, "that there was no hand-wringing about angering the French."

For years, U.S. officials have known that the turn toward Asia could strain relations with European allies. While former President Barack Obama initially embraced the phrase "the pivot" to describe the American move to the region of the world where its economic and strategic interests are greatest — as a basketball player, he latched on to the sports metaphor — his White House eventually banned the public use of the phrase because of European objections.

That did not stop Kurt M. Campbell, a major architect of the strategy, from publishing a 2016 book about it called "The Pivot: The Future of American Statecraft in Asia," which was advertised as an account of "a necessary course correction for American diplomacy, commercial engagement and military innovations."

Campbell is now the Asia coordinator at the National Security Council, and when the Australians decided they were ready to dump the French deal, he was among the first they contacted.