Hanging by a ring: Woman falls down 650 ft high cliff after boyfriend proposes 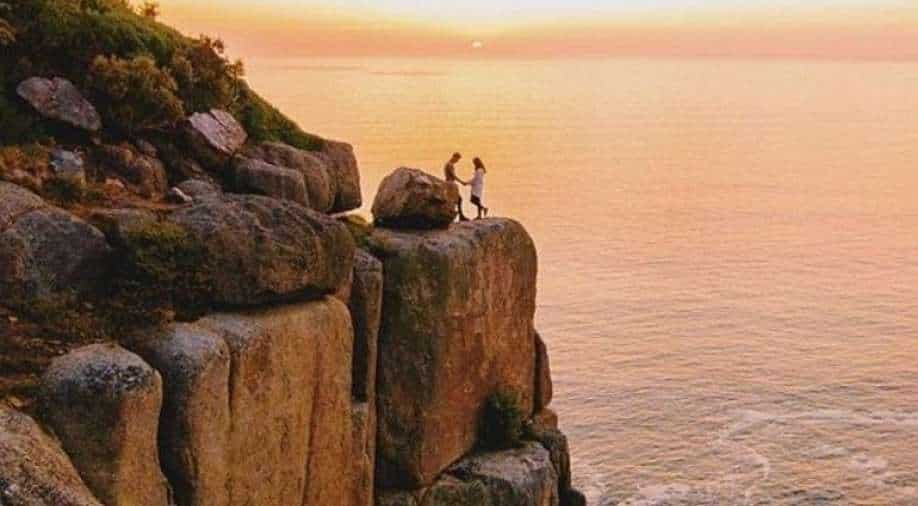 As soon as his girlfriend said 'yes', she slipped due to the rocky terrain and fell down the cliff. The fiance jumped forward to save the love of his life but was left hanging 50-feet while his girlfriend fell deeper

It was a picture-perfect moment for a wedding proposal — the sun was setting, the breeze was cold and the cliff was set for a proposal. However, things took an unexpected turn when the woman fell off the cliff.

A man got down on a knee to propose to his girlfriend on a cliff in a picturesque location. The cliff was at 650 ft height and the sun was setting. To his relief, his girlfriend said yea, but as soon as she said yes, his fiance took a step back and found herself falling from the cliff.

Fortunately, their happy day did not turn into a tragedy as the 32-year-old 'just engaged' woman landed on a bed of snow and survived the fall.

The unnamed couple had been dating for a while and the 27-year-old man had decided to take his girlfriend atop the famous Falkart mountain in Carinthia, Austria to pop the question at the picture-perfect moment of sunset.

However, as soon as his girlfriend said 'yes', she slipped due to the rocky terrain and fell down the cliff. The fiance jumped forward to save the love of his life but was left hanging 50-feet while his girlfriend fell deeper.

Have a look| With fireworks, India, other nations welcome 2021 as celebrations turn low-key

"The two were extremely lucky. He flew 15 meters through the air. The woman fell 200 meters over rocky terrain. Had it not been for snow, it would have turned out very differently," an officer reported.

Emergency services were soon spotted on the proposal site. The boyfriend, hanging for his life, was rescued by a helicopter crew and was immediately taken to a hospital. The doctors revealed he had only suffered a fractured vertebra.

The woman, too, has been admitted to a hospital and does not have any life-threatening injuries.