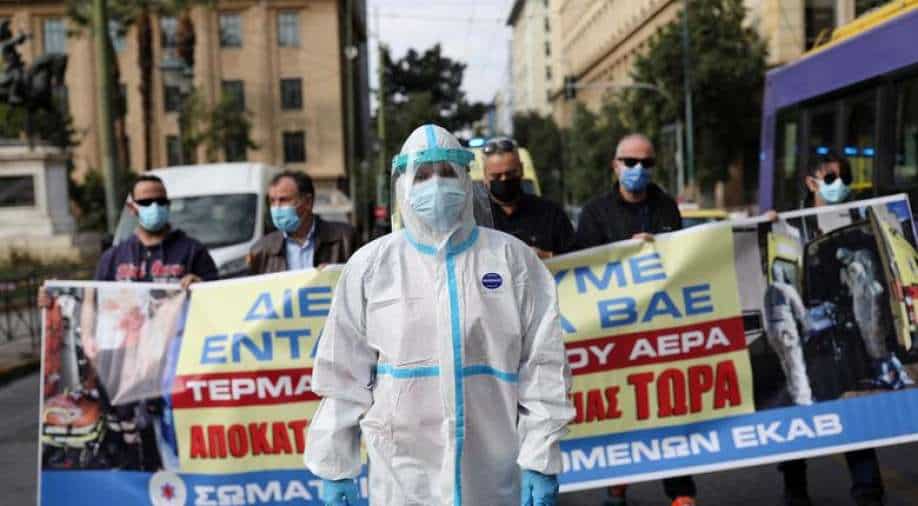 Hospitals, particularly in northern Greece, are scrambling to treat patients, as daily cases reached new record highs this month averaging over six thousand, and wards are running out of space for patients

Workers said they are underpaid, overworked and understaffed in the midst of the pandemic. They called for more hirings, for the government to include them on a list of hazardous professions which receive hazard pay benefits, and for private doctors to be ordered to assist, adding that a decision by the government to suspend unvaccinated health sector workers increased staff shortages.

Greece made vaccinations mandatory for nursing home staff in July and healthcare workers in September.

Hospitals, particularly in northern Greece, are scrambling to treat patients, as daily cases reached new record highs this month averaging over six thousand, and wards are running out of space for patients.

"The stretchers at the hospitals on duty are increasing by the dozens, patients are being chosen for the intensive care units by priority, based on their ages," said president of the Public Hospital Workers Federation Michalis Giannakos. "Patients lives are in danger, and staff that have remained are like elastic bands stretched from clinic to clinic, from ward to ward."

Last week authorities announced new measures which require the unvaccinated to provide negative tests to enter cafes and restaurants, state services and banks. Employees in the public and private sector now also need to test twice a week to enter their workplace.

The government is trying to avoid another lockdown, but with only about 60 percent of the population of 11 million vaccinated, it is considering further restrictions, including possibly more mandatory vaccinations and testing.

Greek government spokesman Giannis Oikonomou said on Monday the health system is under intense pressure, adding only one in ten being treated in intensive care units for coronavirus is fully vaccinated.

Eleven private clinics have volunteered to provide space for COVID patients, he said, while the government has asked for private doctors to volunteer their help, and could order them to provide their services if necessary.