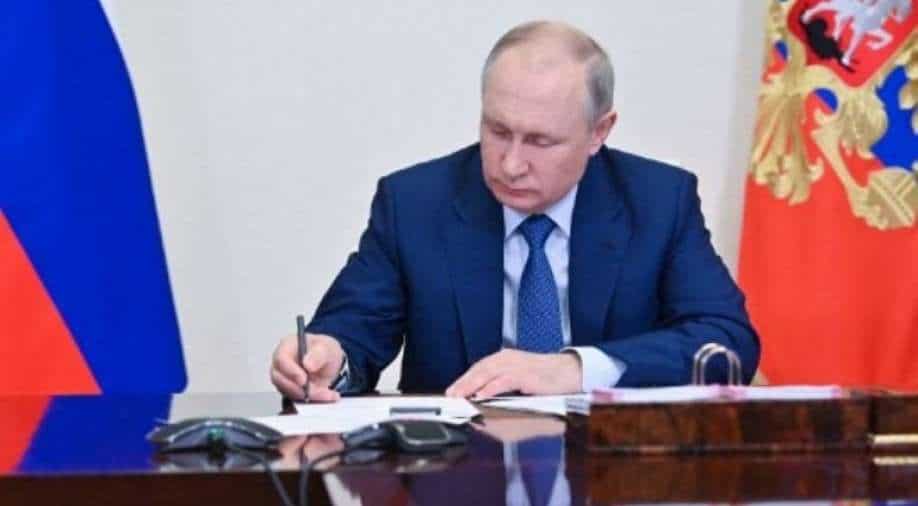 But there remains opposition from numerous EU members states, especially in eastern Europe, wary of talking to the Kremlin

Germany and France are pushing EU counterparts to consider a summit with Russian leader Vladimir Putin as the bloc weighs its strategy to keep Moscow in check, diplomats said Wednesday.

The EU's 27 leaders are set to discuss ties with its vast eastern neighbour at a meeting on Thursday as Brussels admits that relations with the Kremlin have reached their "lowest level".

Berlin and Paris put forward a last-minute proposal for the bloc to contemplate a potential summit in the wake of US President Joe Biden's sit-down with Putin in Geneva last week.

But there remains opposition from numerous EU members states, especially in eastern Europe -- wary of talking to the Kremlin.

EU ambassadors were set to hold a meeting late Wednesday evening to try to thrash out a common position.

"The EU must stand firm and establish a counterbalance against Russia. It must also put itself in a position to resist, in particular, cyberattacks. And it must be able to engage in dialogue with Russia on the subjects for which it has interests," one European diplomat argued.

Also read | 'If you want peace, prepare for war': Russia ready to cut ties with EU over sanctions, asserts Lavrov

"But there is a question over the format for this dialogue. How to conduct this dialogue? At what level? Through what channel? And what role should be given to the EU institutions."

Another diplomat insisted that it was "premature" to talk about a meeting with the Russian leader.

"Why have a summit with Putin if there is nothing positive to discuss," the diplomat said.

Ties between the EU and Russia have been in the doldrums since the Kremlin annexed Crimea from Ukraine in 2014.

The bloc has slapped waves of sanctions on Moscow, and Russia has responded with its own counter-measures.

The last summit between EU chiefs in Brussels and Putin took place in early 2014, with the Kremlin strongman preferring to deal bilaterally with individual nations since then.

While the German-French proposal mooted engagement with Moscow, it also made clear the bloc needed to remain united in the face of Russian aggression.

Proposed summit conclusions seen by AFP said there needs "a firm and coordinated response by the EU and the Member States to Russia's malign activities, making full use of all instruments at the EU's disposal, and ensuring coordination with other partners."