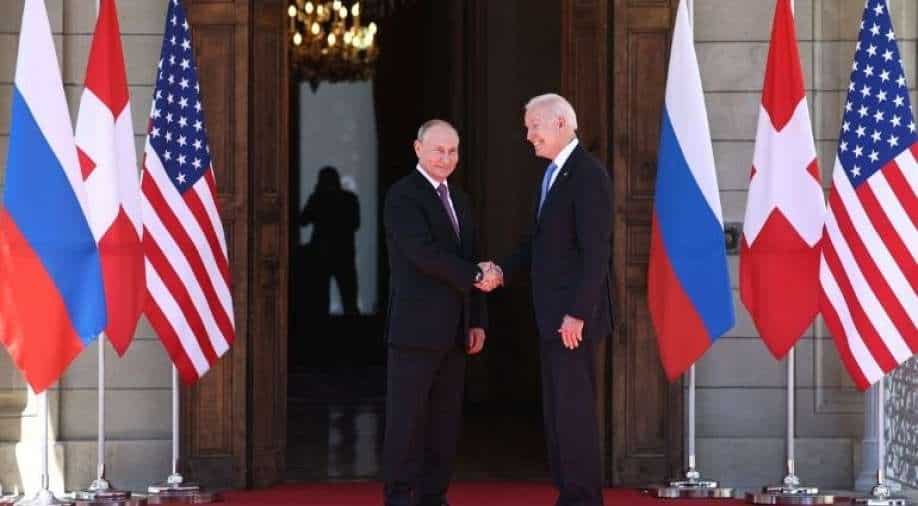 US President Biden's first overseas trip put his diplomatic and negotiating philosophy on display, as he offered an often rosy take on the possibilities of cooperation with Russian President Putin.

President Joe Biden's first overseas trip put his diplomatic and negotiating philosophy on display, as he rallied traditional US democratic allies to confront new and old challenges and offered an often rosy take on the possibilities of cooperation with Russian President Vladimir Putin after a one-on-one summit.

Here are some key takeaways:

A reset they didn't call a reset

Biden and Putin did not use the word reset to describe the state of relations between the two nations after their summit in Switzerland.

But that's what the meeting amounted to, with both men staking out clear areas of disagreement, even as they pointed to smaller-scale areas where they could cooperate.

They conveyed both mutual respect and mutual scepticism. It was an abrupt return to more conventional U.S.-Russia framing after the presidency of Donald Trump, who often seemed to elevate Putin and create at least the aspiration that the countries could be more like partners.

This time, each leader left with the understanding that some of the old rules still apply. Russia returns to its place as a worthy adversary," as Biden put it, rather than some kind of colleague. And the longer-standing tensions, over cyber warfare and human rights, remain.

The art of the face

After their three-hour meeting, Biden's sunny disposition stood in sharp contrast to the more sober, taciturn tone of Putin, who at times became defensive when asked questions by reporters about human rights violations in Russia and the country's invasion of Ukraine.

Even so, Biden acknowledged his optimism was more wishful thinking than reality.

I'm going to drive you all crazy because I know you want me to always put a negative thrust on things, particularly in public, he said shortly before boarding Air Force One, adding, that way, you guarantee nothing happens.

It highlighted the president's negotiating style, whether it be with Putin or with Senate Republicans at home on infrastructure in which he publicly expresses his belief that a deal can be struck despite often overwhelming odds.

I know we make foreign policy out to be this great, great skill that somehow is sort of like a secret code," Biden said. "All foreign policy is a logical extension of personal relationships. It's the way human nature functions."

Biden's eight-day, three-country foreign trip demonstrated his emphasis on personal relationships above all.

There's no substitute, as those of you who have covered me for a while now, for face-to-face dialogue between leaders. None, Biden said, declaring his summit with Putin a success simply for the fact that they spoke in person.

Throughout his trip, most of Biden's meetings were conducted in private, without cameras, or with only a few moments open to media.

It highlighted Biden's faith in intangible personal ties that can drive policy outcomes, both foreign and domestic.

And it marked a clear departure in style from Trump, whose freewheeling public meetings with global leaders became something of a legend on the international stage. Relationships tended to flow one way with obsequious public displays by heads of state and government trying to get on Trump's good side.

Biden is banking that those leaders will welcome a return to the old school approach.

With a little help from my friends

Before leaving Washington, Biden reasserted his view that democracies are in a generational confrontation with autocratic governments and that the U.S. can't hope to prevail if it stands alone.

With that in mind, he rallied American allies at the Group of Seven meetings of wealthy democracies and treaty partners at NATO, before his sit-down with Putin.

The sequencing was as much strategy as it was symbolism, with the unified-front posture with allies meant to bolster Biden's position regarding Russia. It also drove momentum behind the U.S.' ongoing showdown with China over trade, security and health policy, as Biden secured tough language on China, both in the G-7 leaders' communique and from NATO countries in their joint statement.

Mad, but don't call it a new cold war

In the wake of a series of disruptive cyberattacks that have emanated from Russia, Biden pressed Putin to curtail criminal and state-sponsored activity from his country by warning of American digital firepower and his willingness to deploy it.

Saying he gave Putin a list of 16 critical infrastructure" sectors, from the energy industry to water systems, Biden said the leaders agreed to task experts to work on specific understandings about what's off-limits in this new domain.

Even as Biden said of Putin, I think that the last thing he wants now is a Cold War, the American president embraced a defining characteristic of that era: deterrence.

Biden said he broached with Putin and his top advisers the possibility of a cyberattack taking down one of their oil pipelines and the devastating impact it could have on their energy-dependent economy.

Biden said Putin was well aware that the US has the significant cyber capability. He doesn't know exactly what it is, but it's significant, and if in fact, they violate these basic norms, we will respond, he knows, in a cyber way.

After four years of America First under Trump, Biden set out to show the world that America is back, but lingering domestic instability cast a long shadow overseas.

Whether it be the last president's temperament and isolationist policies or the months of efforts to undermine the 2020 election and the Jan. 6 Capitol insurrection, the tumult of the last four years remains a fresh and raw memory for allies and adversaries alike.

Biden's actions and public comments showed the lengths to which he felt he needed to go to reassure allies that the U.S. could be a credible leader on the world stage.

They have seen things happen, as we have, that shocked them and surprised them, Biden said Monday of American allies. But I think they like I do, believe the American people are not going to sustain that kind of behaviour.

Even if allies were convinced, it was clear that adversaries were unwilling to forget so soon.

In his news conference following his meeting with Biden, Putin repeatedly deflected from his own deadly crackdowns on political dissenters with familiar but now more potent whataboutisms, by pointing to the Capitol assault and Black Lives Matter protests against racial injustice and police brutality in the U.S. last year.

Biden called it a ridiculous comparison, though it was clear some damage couldn't be swiftly undone.