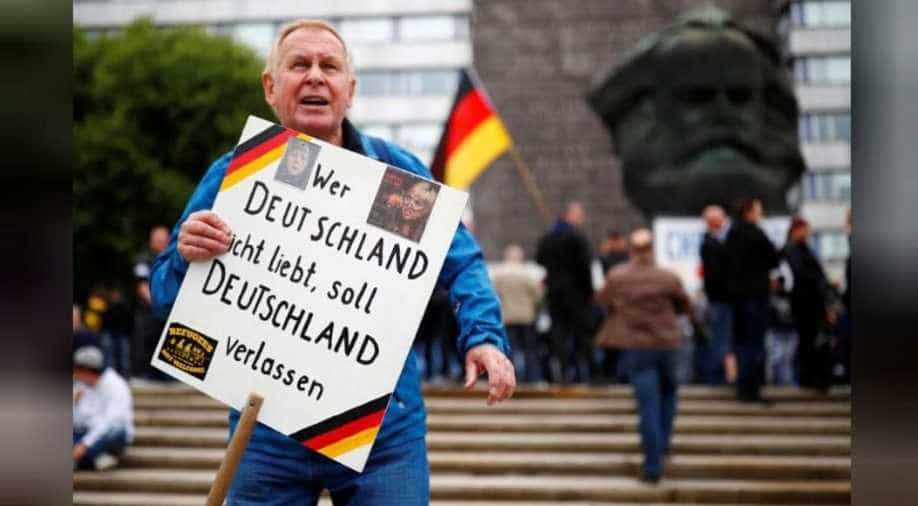 A demonstrator of the far-right 'Pro Chemnitz' group holds a placard reading 'Whoever does not love Germany, should leave Germany' in Chemnitz in Germany. Photograph:( Reuters )

The city is the birthplace of the Islamophobic Pegida movement, which holds weekly rallies here, while the anti-immigration Alternative fuer Deutschland (AfD) party won 28 per cent in September regional elections.

The eastern German city of Dresden has declared a "Nazi emergency" as officials warned of a rise in far-right support and violence.

The city is the birthplace of the Islamophobic Pegida movement, which holds weekly rallies here, while the anti-immigration Alternative fuer Deutschland (AfD) party won 28 per cent in September regional elections.

Dresden's city council on Wednesday backed a resolution against far-right extremism with the title "Nazinotstand?", or "Nazi emergency?".

It was brought by Max Aschenbach, a local councillor for left-leaning satirical party Die Partei, who told the DPA news agency that "this city has a Nazi problem".

The resolution said the city was "worried that anti-democratic, anti-pluralist, discriminatory and far-right positions which include violence" were on the rise in Dresden.

It called for a "strengthening of democratic culture", making a priority of "the protection of minorities, human rights and victims of extreme-right violence".

The motion also stressed the importance to fight "anti-Semitism, racism and Islamophobia".

The resolution was approved by 39 council member votes against 29.

It was backed by the left and liberal parties but rejected not only by the AfD members but also by centre-right Christian Democrats who said it should not have targeted right-wing extremism only.

"The title is clearly pointed," said Thomas Loeser, a council member for the Green party.

"But we, as the city community, clearly declare our support for those who oppose racism and anti-Semitism, and expect everybody else to do the same," he said.