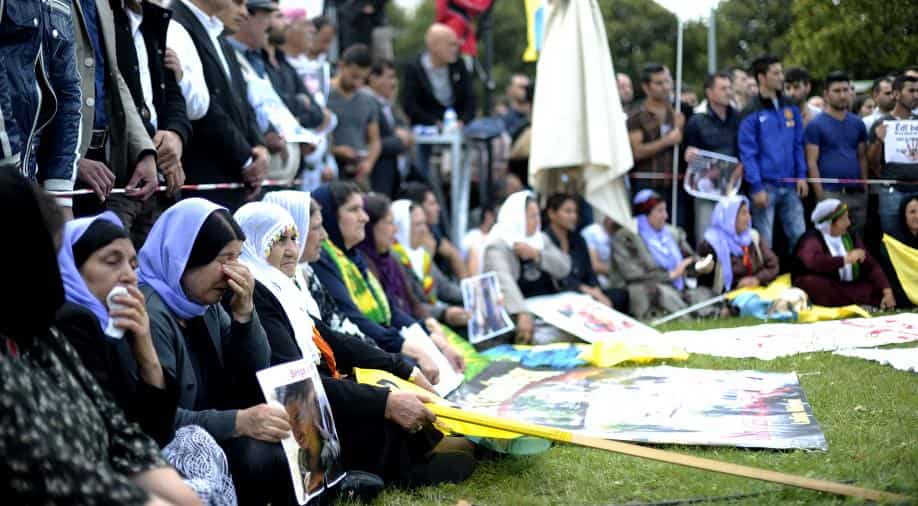 Yazidi women cry over the loss of her loved ones during a protest of ethnic Yazidis against the ongoing attacks against Yazidi in northern Iraq on August 16, 2014 in Hanover, Germany. Photograph:( Getty )

Brazilian police on Friday were investigating the gang-rape of a 16-year-old girl whose attackers boasted about it by posting an online video of her that has horrified the country.

Online social networks erupted with outrage over the video posted on Wednesday featuring the girl naked on a bed and the apparent rapists bragging that she had been raped by more than 30 men.

They are suspected of assaulting her on May 21 in Rio de Janeiro, a city stricken by violent crime that will host the Olympic Games in August.

“There are strong indications that the young woman was raped,” Rio police chief Fernando Veloso told a news conference.

“We cannot say whether there were 30 attackers, 33 or 36. The investigations will determine that,” he said.

Police have identified four of the men suspected of taking a “direct or indirect” part in the rape or the posting of the video, he added.

“I condemn most forcefully the rape of the teenager in Rio de Janeiro,” he wrote on Twitter.

"This case is not unusual," said Luise Bello, spokeswoman for women’s rights group Think Olga, of the Rio gang-rape. "The culture of rape is very strong in Brazil. It is part of our daily life, although people deny it."

“It is absurd that in the 21st century we should have to live with barbaric crimes such as this.”

The authorities are working “to find those responsible and rigorously punish the authors of this rape and the publishing of this criminal act on social networks,” he said.

Brazil’s ‘culture of rape’
The United Nations women’s rights agency condemned the case along with another recent alleged gang-rape of a 17-year-old girl in the northeastern state of Piaui.

“Apart from the fact that these are young women, these barbaric cases are similar in that the teenagers were lured by their attackers in premeditated plots,” UN Women in Brazil spokeswoman Nadine Gasman said on Thursday.

“They were violently attacked in a context of illegal drug use.”

Brazilian police recorded a sexual assault in the country every 11 minutes in 2014, the Brazilian non-governmental organisation Public Safety Forum said in a study, estimating that half a million such assaults take place overall each year.

“This case is not unusual,” said Luise Bello, spokeswoman for women’s rights group Think Olga, of the Rio gang-rape.

“The culture of rape is very strong in Brazil. It is part of our daily life, although people deny it.”

He took over as interim president earlier this month from suspended leftist leader Dilma Rousseff, who faces an impeachment trial for allegedly fiddling government accounts.

“Once more I reiterate my condemnation of violence against women,” she wrote on Facebook.

Countless messages of condemnation on social networks have included calls for a street demonstration in Rio on Friday evening.