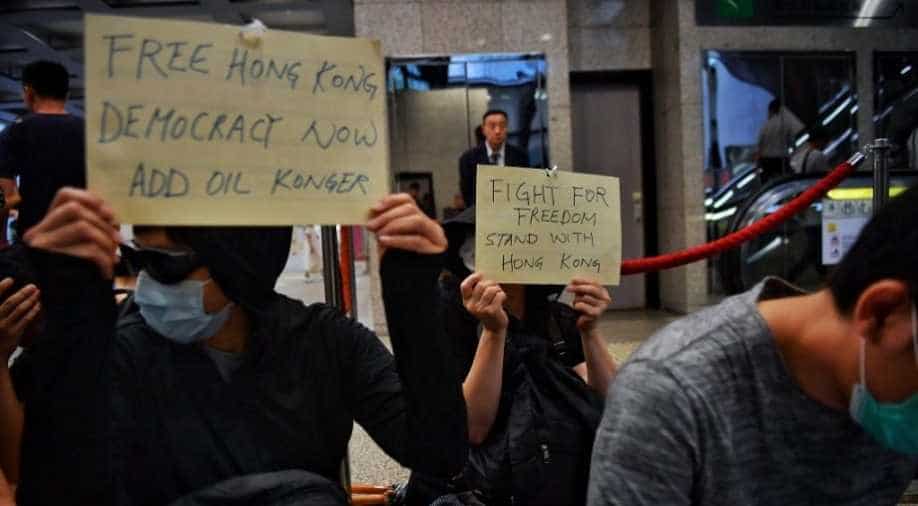 Pro-democracy protesters gather in the lobby of the Revenue Department in Hong Kong. Photograph:( AFP )

The city has been wracked by more than two months of protests over an attempt by its Beijing-backed government to pass an extradition bill which opponents saw as a huge dent in Hong Kong's autonomy.

G7 leaders meeting in France on Monday backed Hong Kong's autonomy as laid out in a 1984 agreement between Britain and China and called for calm in the protest-hit city.

"The G7 reaffirms the existence and the importance of the 1984 Sino-British agreement on Hong Kong and calls for avoiding violence," according to a joint statement issued in French at the end of a G7 meeting in Biarritz, southwest France.

The city has been wracked by more than two months of protests over an attempt by its Beijing-backed government to pass an extradition bill which opponents saw as a huge dent in Hong Kong's autonomy.

They have since morphed into a call for greater democracy and police accountability, with youths at the forefront of demonstrations that have at times descended into clashes with security forces.

On Monday, police used water cannons to repel what they termed "extremely violent" demonstrators, following another weekend of clashes at pro-democracy rallies.

Twenty-one officers were injured during the clashes, Hong Kong police said, while dozens of protesters were arrested -- including a 12-year-old -- for unlawful assembly, possession of weapons and assaulting police.

More demonstrations are planned in the days and weeks ahead, including a rally at Hong Kong's Cathay Pacific Airways headquarters on Wednesday to protest against perceived "white terror", a term used to describe anonymous acts that create a climate of fear.

Cathay has emerged as the biggest corporate casualty of the protests after China demanded it suspend staff involved in, or who supported, the anti-government demonstrations that have plunged the city into its biggest crisis since 1997.

The protests pose the gravest popular challenge to Chinese President Xi Jinping since he took power in 2012, with his government keen to quell the unrest ahead of the 70th anniversary of the founding of the People's Republic of China on Oct 1.

Protesters again adopted cat-and-mouse tactics on Sunday evening, gathering then quickly dispersing, only to reappear in other places.

They also set up barricades to block some roads, following a largely peaceful rally earlier in the day.

Police said the 86 arrested people were aged 12 to 52, and they were suspected of offences including unlawful assembly, possession of offensive weapons and assaulting police officers.

Twenty-one officers were injured in the violence, they said.