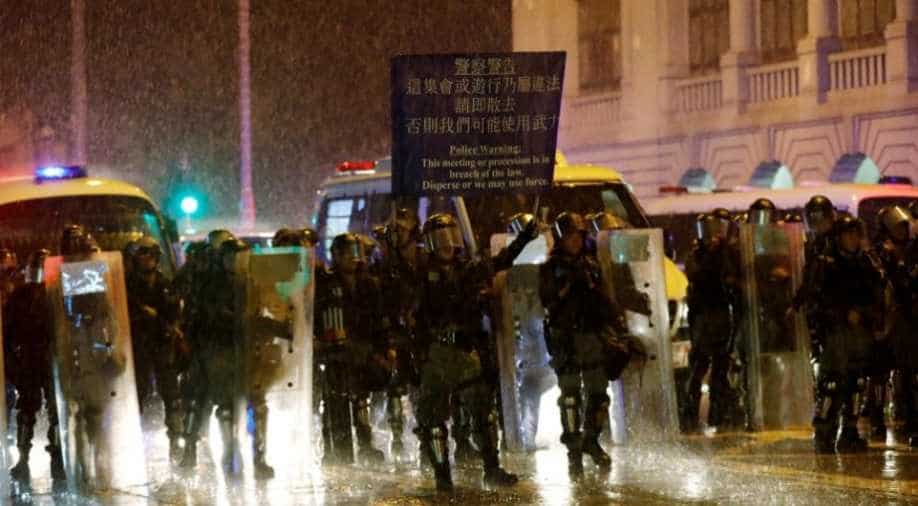 Riot police officers raise a warning flag as they stand guard during a protest in Hong Kong, China. Photograph:( AFP )

Police fired water cannon and volleys of tear gas in running battles with brick-throwing protesters on Sunday, the second day of violent clashes in the Chinese-ruled city.

Sunday's protests saw some of the fiercest clashes yet between police and demonstrators since protests escalated in mid-June over a now-suspended extradition bill that would have allowed Hong Kong people to be sent to mainland China for trial.

Police fired water cannon and volleys of tear gas in running battles with brick-throwing protesters on Sunday, the second day of violent clashes in the Chinese-ruled city.

Six officers drew their pistols and one officer fired a warning shot into the air, police said in a statement.

"The escalating illegal and violent acts of radical protesters are not only outrageous, but they also push Hong Kong to the verge of a very dangerous situation," the government said in a statement.

More demonstrations are planned in the days and weeks ahead, including a rally at Hong Kong's Cathay Pacific Airways headquarters on Wednesday to protest against perceived "white terror", a common expression to describe anonymous acts that create a climate of fear.

Cathay has emerged as the biggest corporate casualty of the protests after China demanded it suspend staff involved in, or who support, the anti-government demonstrations that have plunged the former British colony into a political crisis.

The protests also pose the gravest popular challenge to Chinese President Xi Jinping since he took power in 2012, with Beijing eager to quell the unrest ahead of the 70th anniversary of the founding of the People's Republic of China on October 1.

Protesters once again adopted cat-and-mouse tactics on Sunday evening, moving swiftly to locations across the former British colony, where they set up barricades to block some roads, following a largely peaceful rally earlier in the day.

Police said they arrested 29 men and seven women, aged 12 to 48, for offences including unlawful assembly, possession of offensive weapons and assaulting police officers.

The clashes on Saturday and Sunday marked a return to unrest after days of calmer demonstrations. The protests, which escalated in June over a now-suspended extradition bill, have rocked Hong Kong for three months, occasionally causing serious disruption including forcing the closure of the airport.

The city, a major Asian financial centre, is facing its biggest political crisis since the handover of power from British rule in 1997.

Protesters say they are fighting the erosion of the "one country, two systems" arrangement under which Hong Kong returned to China with the promise of continued freedoms, not enjoyed on the mainland, for 50 years.

The protests are taking a toll on the semi-autonomous Chinese city, where hotels and restaurants are half-empty and several global events have been postponed.