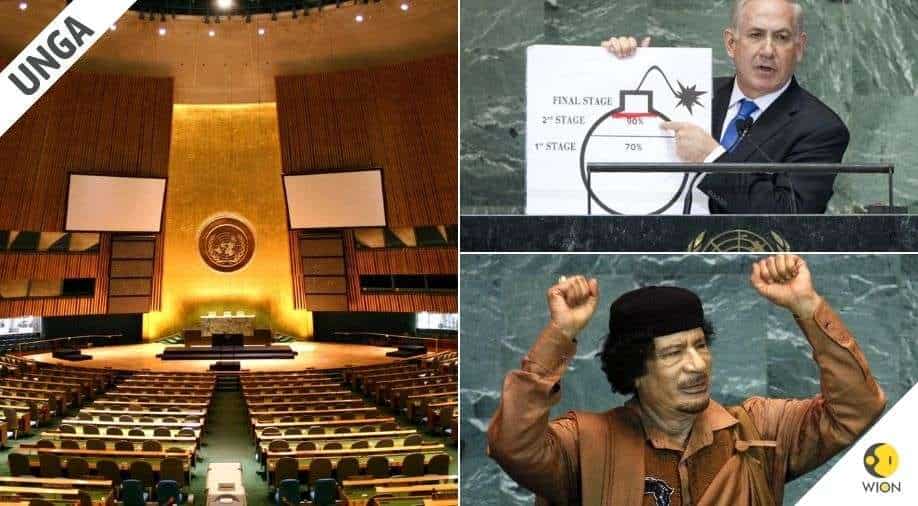 World leaders are gathering in United States for United Nations General Assembly (UNGA) a year after skipping the face-to-face meeting due to Covid pandemic. As the leaders gear up to address important issues, here's a look at some of the most famous and controversial speeches

The UNGA debates are one of the most awaited debates of the world that take place annually in the United States. Last year, for the first time ever, the world leaders were unable to gather face-to-face to discuss on important matters due to the coronavirus pandemic.

However, this is not the only first that has happened in the UNGA. Over the years there have been several instances where people have left their seats for a standing ovation… or sometimes to leave the room out of anger. The speeches, well-delivered by experts and world leaders, can make or break relations, bring light and justice to important topics and hope for peaceful mediation of disputes between governments and leaders.

Here are five of the most memorable speeches and their impact:

The former Premier of the Soviet Union made it to the history of the UNGA speeches through his actions, and not words.

In 1960, Khrushchev was angered when the head of the Filipino delegation Lorenzo Sumulong referred to "the peoples of Eastern Europe and elsewhere which have been deprived of the free exercise of their civil and political rights and which have been swallowed up, so to speak, by the Soviet Union". 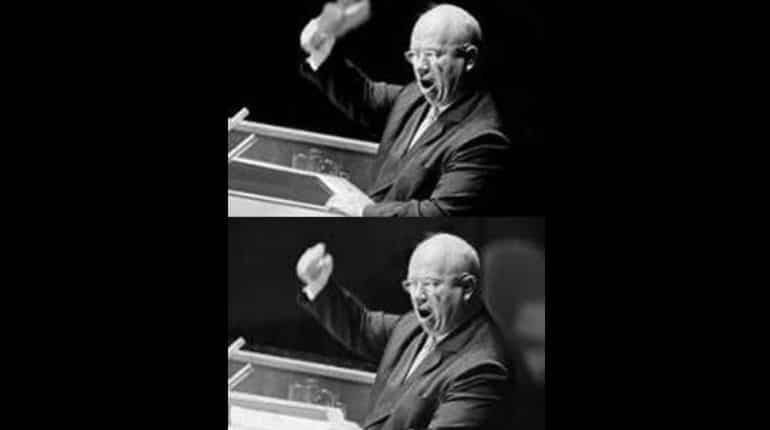 This statement angered the Soviet leader who then went on to label Sumulong as "a jerk, a stooge, and a lackey". after brushing him off from the spotlight.

The debate got heated and the room burst into murmurs. Khrushchev continued making his point and started banging his fist on the podium to get the room quiet, but when all things failed, at one point, as per several reports, the Soviet leader took off his shoe and banged it on his podium.

Even in his memoir, Khrushchev made mentions of the incident, but till this date there has been no conclusion of whether or not the narrative is true to its happenings.

However, Khrushchev’s angered gesture did make it to the history and became a famous gesture of overheated conversations. 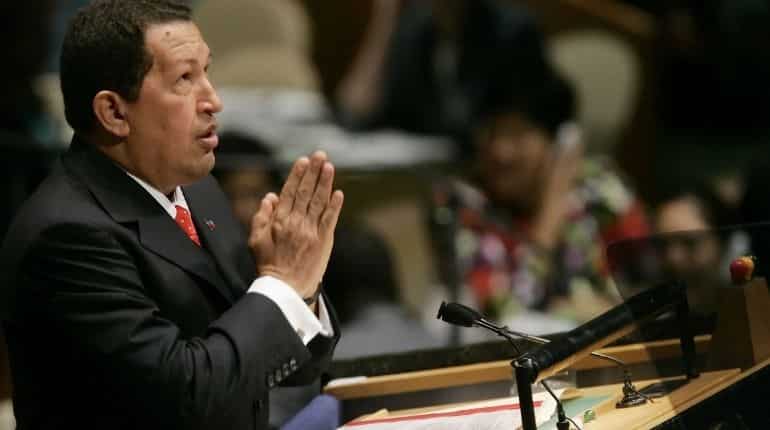 Chavez has been openly against the United States since the beginning of his days in the office and he made sure he reiterated that in front of the world in the UNGA. The Venezuelan leader known for his theatrics took to the stage a day after Bush addressed the assembly and compared the POTUS and his actions to Satan.

The incident took place in 2006 and Chavez referred back to his comment in 2009 when Barack Obama had come to power. Putting himself in the spotlight again, Chavez said it "no longer smells like sulfur" now that Obama is the POTUS.

Popularly known as Colonel Qadhdhāfī, the Libyan leader made his debut in the UNGA in 2009. Qadhdhāfī had been in power for nearly 40 years but had not even once addressed the assembly. 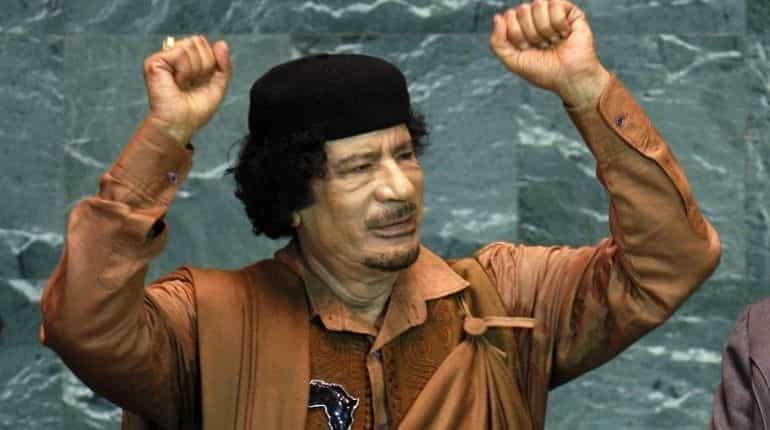 However, in 2009 the strongman decided to make up for all the lost time and delivered a 100 minutes-long speech where everyone was shocked as well as surprised, among other emotions.

In his famous 100-minutes-long speech, Qadhdhāfī raised questions about several issues such as poverty, injustice, racism and more. He also accused the United States of developing the deadly Swine Flu for personal gains, and even questioned the official records of the assassination of John F. Kennedy — the 35th President of the US.

He hit the ceiling when he attacked the United Nations by likening it to the notorious and infamous terrorist organisation, al Qaeda. "It should not be called a security council, it should be called a terror council," the Libyan leader said.

The former Israeli leader's name goes down in history of UNGA as the leader who used one of the most controversial virtual aid/props in the assembly. 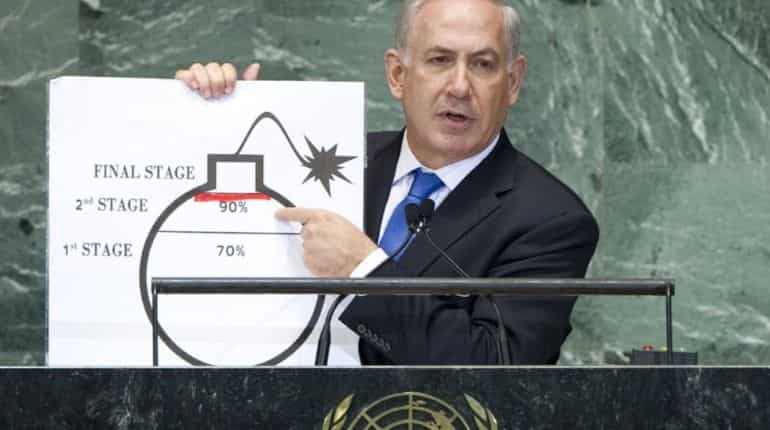 In 2012, Netanyahu took to the podium to convince the world leaders that Iran was very close to developing a nuclear weapon. In a bid to make leaders understand his point clearly, the controversial Israeli leader took out a white board which had an illustration of a cartoon-style fizzing bomb. This bomb was divided into three parts: 70 per cent, 90 per cent and the 'final stage'. Netanyahu, with a red marking on the drawing, claimed Iran was 90 per cent ready with the nuclear weapon.

However, Tehran has always rubbished Netanyahu's claims and has reiterated time and again that it was never developing a nuclear weapon.

The infamous former President of the United States, Donald Trump, has always managed to stay in the headlines. However, in the 2017 UNGA speech, he attracted eyeballs when he threatened to "totally destroy" North Korea.

Trump started his speech by aiming directly at North Korea. He stressed on the tainted history of the country which is infamous for dictatorships, kidnapping, missile and nuclear tests, limited rights and oppression on citizens. 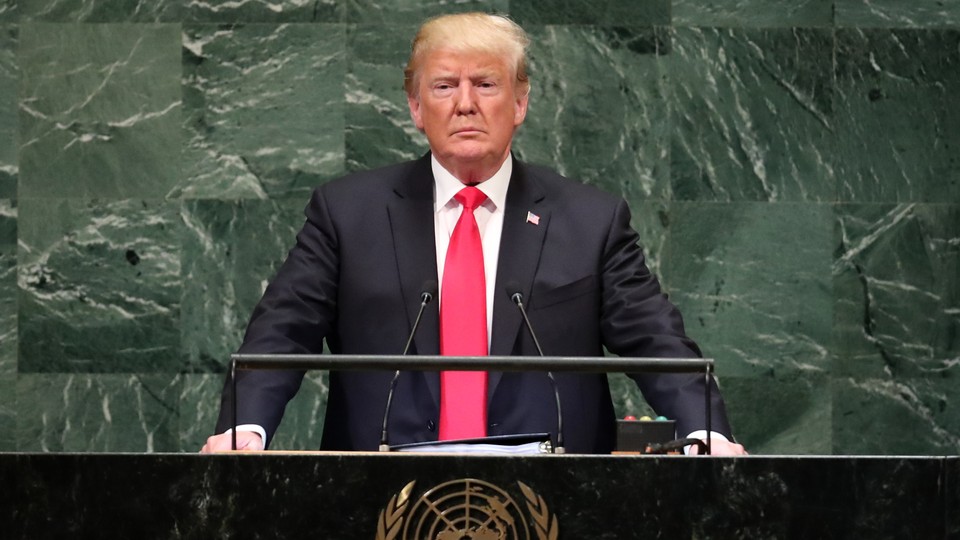 Reminding the world about the immoral decisions of North Korea, Trump boasted that the US will defend itself if the two countries face each other and "we will have no choice but to totally destroy North Korea".

The sentence was followed by murmurs around the whole assembly as the leaders looked at each other, shocked by this strong statement of Trump.

However, the former reality TV star did not stop there. Labelling the North Korean leader Kim Jong Un as the 'rocket man', Trump continued, "Rocket Man is on a suicide mission for himself and for his regime".

After North Korea, he went to attack Iran by claiming the government had robbed the 'good people of Iran' of their destiny. "The entire world understands that the good people of Iran want change and, other than the vast military power of the United States, that Iran’s people are what their leaders fear the most," he claimed on behalf of Iran citizens.