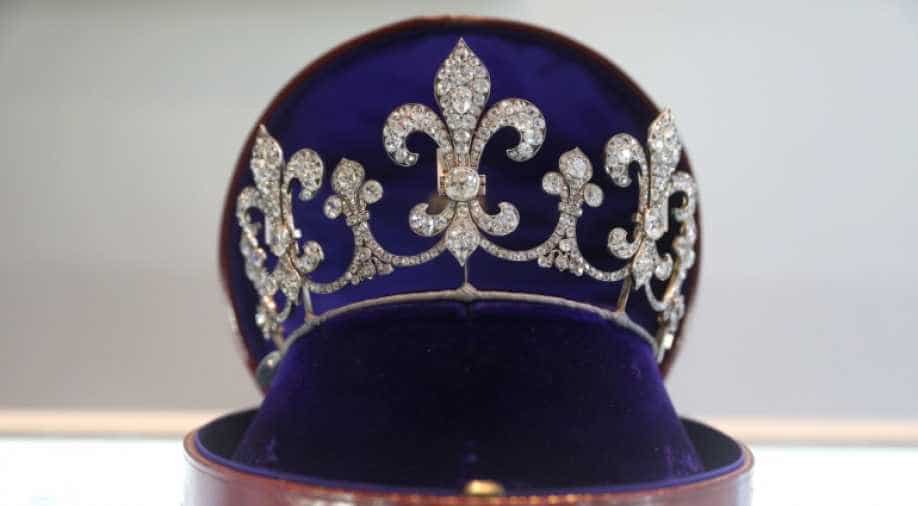 A diamond tiara created for Archduchess Maria Anna of Austria is displayed during a press preview ahead of the upcoming auction 'Royal jewels from the Bourbon Parma Family' at Sotheby's. Photograph:( Reuters )

Held in private European collections for more than 200 years, 10 royal jewels that belonged to the ill-fated Marie Antoinette and were passed down through Italy's royal Bourbon Parma family, featured among 100 lots that all found new owners.

Held in private European collections for more than 200 years, 10 royal jewels that belonged to the ill-fated Marie Antoinette and were passed down through Italy's royal Bourbon-Parma family, featured among 100 lots that all found new owners.

"The Marie Antoinette provenance is probably second to none. It's a record for a sale of royal jewels," David Bennett, chairman of Sotheby's international jewellery division who conducted the Geneva auction, told reporters.

The total exceeded the $50 million at its historic two-day auction of the Duchess of Windsor jewels, held in the Swiss city in 1987.

Bennett said that bidders in 43 countries participated in the Bourbon-Parma sale. "It's amazing when you think that these jewels, the majority of them, have not been seen in public for over 200 years. And so for collectors, this was a once in a lifetime moment really," he said.

Andres White Correal, a Sotheby's jewellery expert, said: "I think we had said when we did the press conference for this sale that this was going to be the Sale of this Century. And I think that the results tonight prove that this is the case."

The collection had a total pre-sale estimate of $4.5 million, but due to the historic provenance, bidding soared by phone, in the saleroom and online, to reach many times that.

The top lot was an 18th-Century natural pearl and oval diamond pendant with a bow motif, which Marie-Antoinette would suspend from a three-row pearl necklace. The pendant soared to 36.4 million Swiss francs - which Sotheby's said was a world record for a pearl - after 10 minutes of seesaw bidding.

Marie Antoinette, an Austrian Archduchess who married the future King Louis XVI, secretly sent the jewels abroad in a wooden chest to her sister as they planned to escape from Paris.

But the royal couple was arrested in 1792 when the French Revolution overthrew the monarchy and executed by guillotine the following year. Their only surviving daughter Marie-Therese later retrieved the jewels in Vienna, which passed on through the Duke of Parma line.

The collection was sold off by descendents of Elie de Bourbon, Duke of Parma, whose wife was Marie Anne de Habsbourg-Lorraine, Sotheby's said. It declined to name the sellers who were heirs to the couple's eight children, all deceased.

A monogram ring, bearing Marie-Antoinette's initials MA and containing a lock of her woven hair, had been estimated at $8-10,000, but soared in bidding to a whopping 447,000 francs.

The top lot - the pearl and diamond pendant - was sold to a private collector bidding by phone, who asked to remain anonymous. The 10 lots combined fetched $42.7 million, Sotheby's said.