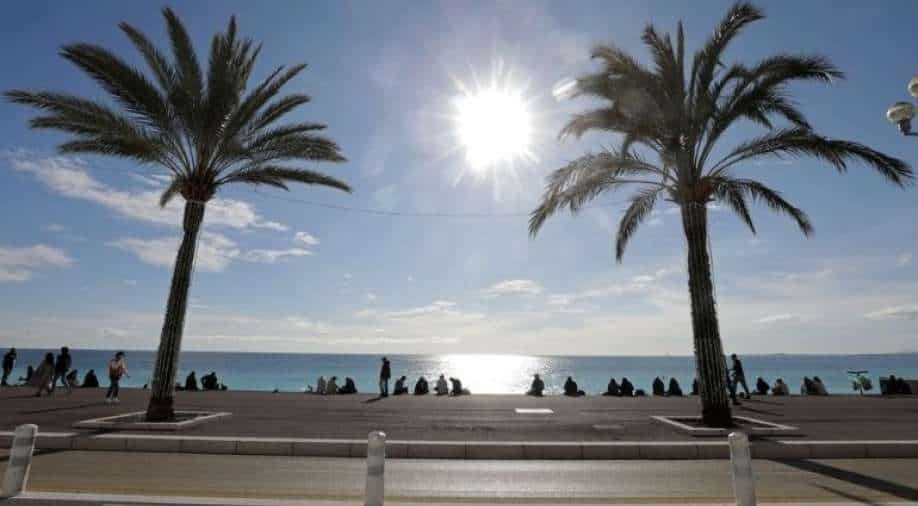 People take their lunch on the Promenade des Anglais in Nice amid the coronavirus disease (COVID-19) outbreak in France. Photograph:( Reuters )

With close to one million inhabitants, greater Nice is the second-biggest city on the French Mediterranean coast after Marseille, and the fifth-biggest in France and has now been added to UNESCO world heritage site list

The United Nation's cultural organisation said on Tuesday that it had added the French Mediterranean city of Nice to its world heritage list.

UNESCO made the announcement in a tweet calling Nice, famous for its mild climate, the "Winter resort town of the Riviera".

Nice joins France's more than 40 world heritage sites which include the banks of the river Seine in Paris, the Amiens cathedral, the Mont Saint Michel and stretches of the Loire valley.

"The history of Nice, which is at the same time deeply rooted and open, Mediterranean and Alpine, European and cosmopolitan, has produced an architecture and a landscape that are unique, a model for many other cities in the world," Nice's mayor Christian Estrosi said in reaction to the announcement.

With close to one million inhabitants, greater Nice is the second-biggest city on the French Mediterranean coast after Marseille, and the fifth-biggest in France.

It is a tourist hotspot with several million visitors per year, and its airport is one of the country's busiest.

Nicknamed "Nice the Beautiful", the city attracted European aristocracy from the 18th century, starting with British royalty who had the seafront "Promenade des Anglais" ("Promenade of the English") named after them.

Painters including Marc Chagall and Henri Matisse also stayed there, as did writers Anton Chekhov and Friedrich Nietzsche.

The seafront walk became the scene of a murderous attack on July 14, 2016, when a 31-year-old Tunisian drove a truck into crowds gathered for fireworks to celebrate France's national holiday.

Eighty-six people, including 15 children, were killed in the attack for which the Islamic State claimed responsibility.

The UN cultural body awards world heritage status to sites judged to be of special universal value to humanity.

Top heritage sites include the Great Wall of China, the Great Barrier Reef in Australia, Machu Picchu in Peru and the Acropolis in Greece.

The sought-after distinction brings intangible benefits, but also often boosts tourism, and can help secure funding for the preservation of sites.