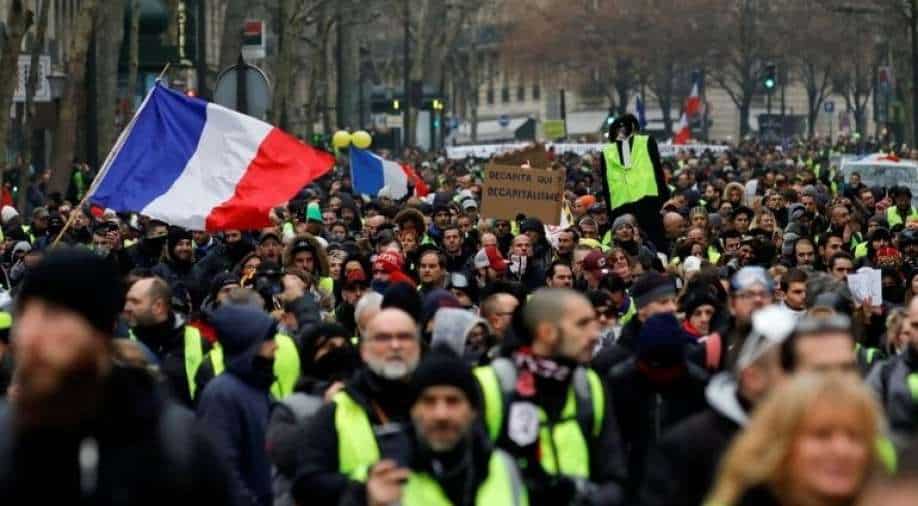 This was the second weekend of such protests, however, the intensity of these demonstrations was higher this weekend

People of France have taken over the streets to protest against the planned security law being brought in by the French President Emmanuel Macron.

A series of protests broke out throughout the country where people took to streets to carry out massive demonstrations and rallies to voice their concern against the proposed security law. The protests started as peaceful demonstrations, but as the crowd grew thicker, the local police departments imposed stricter rules and the protests soon turned into a warn zone-like situation.

After day-long protest, the French police arrested 95 people across the country. While the protestors accused the police of extreme violence, the French police reported 67 of their officers have suffered injuries while trying to control the demonstrations, Interior Minister Gerard Darmanin told reporters on Sunday.

In Paris alone, 48 police officers were injured. In addition to this, a firefighter, too, was injured after he was hit by a projectile while serving his duty at the site of the demonstrations. The Paris Police Department arrested 25 people, out which two were identified as minors.

This was the second weekend of such protests, however, the intensity of these demonstrations was higher this weekend. When people took to streets with boards in hands and anti-government slogans, nobody was expecting such a violent clash between the locals and the police officers.

However, as the day progressed, vehicles were lit on fire, several disputes broke off and windows of local shops and showrooms were smashed. The French police, in return, fired tear gas shells on the demonstrators.

The numbers demonstrating on Saturday were significantly down, with the nationwide figure at 52,350 against 133,000 a week earlier, the interior ministry said. Around 5,000 people demonstrated in Paris against 46,000 last week, it added. A police source on Saturday blamed the violence on 400 to 500 radical elements.

Meanwhile, Macron and his administration have decided to rewrite the draft. According to the controversial article 24, the plan deemed sharing of images of police with "obvious intention to harm" punishable by a year in prison and $54,000 fine. The protestors argue this will be a major breach of human rights.