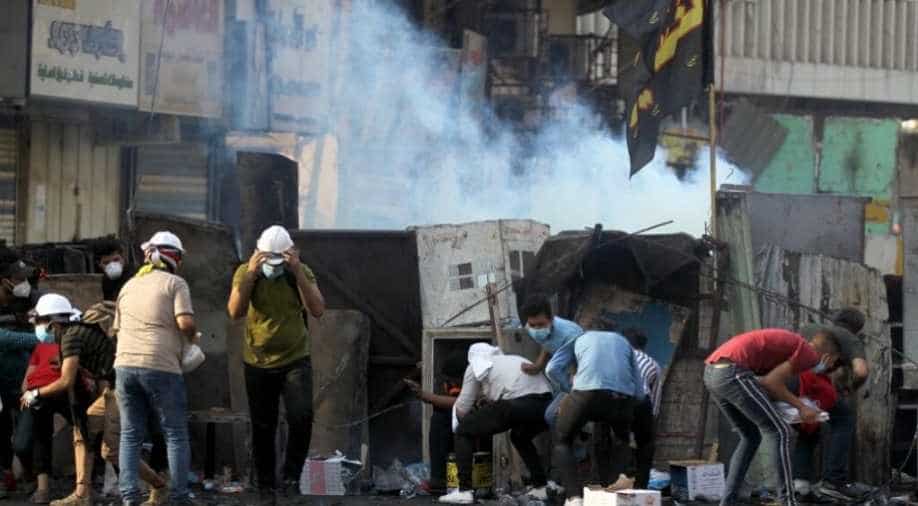 On Thursday morning, three protesters died after tear gas canisters directly struck them in the head and another died in hospital from wounds from a stun bomb fired by security forces, the sources said.

Iraqi security forces killed at least four people on Thursday and wounded more than 50 as they tried to push protesters further back to their main camp in central Baghdad, police and medical sources said.

On Thursday morning, three protesters died after tear gas canisters directly struck them in the head and another died in hospital from wounds from a stun bomb fired by security forces, the sources said.

At least half of the wounded protesters had injuries sustained from live ammunition, police and medical sources said.

The others were taken to hospital having choked on tear gas, or were struck by rubber bullets, the sources said.

The square has been the epicentre of the country's anti-government protests for weeks.

More than 300 people have been killed since the protests in Baghdad and the south of the country started in early October, driven by discontent over economic hardship and corruption.

Prime Minister Adel Abdul Mahdi's government has taken some measures to try to quell the unrest, including handouts to the poor and creating more job opportunities for college graduates.

But it has failed to keep up with the growing demands of demonstrators who are now calling for an overhaul of Iraq's sectarian political system and the departure of its entire ruling elite.

The unrest is among the biggest and most complex challenges to the current ruling elite since it took power after the U.S. invasion and the toppling of Saddam Hussein in 2003.

Since putting down an insurgency by Islamic State in 2017, Iraq has enjoyed two years of comparative stability. But despite its oil wealth, many people live in poverty with limited access to clean water, electricity, healthcare or education.