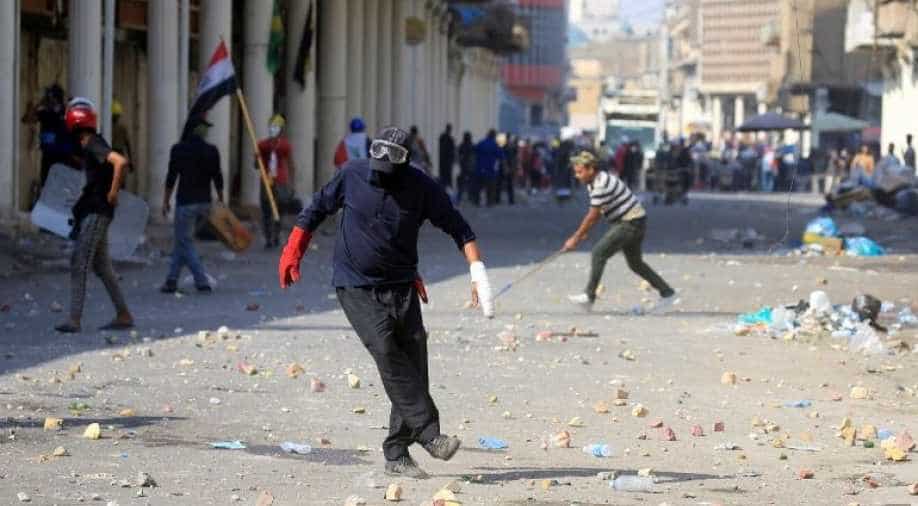 Protests demanding a new leadership have rocked the capital and Shiite-majority south for weeks, the crowds undeterred by government pledges of reform and the deaths of more than 300 people.

Anti-government rallies swelled in Iraq's capital and south Wednesday as Baghdad faced new pressure from both the street and the United Nations to respond seriously to weeks of demonstrations.

Protests demanding a new leadership have rocked the capital and Shiite-majority south for weeks, the crowds undeterred by government pledges of reform and the deaths of more than 300 people.

They dimmed for a few days following a deadly crackdown by security forces in Baghdad and major southern cities but flared again Wednesday with demonstrations by striking students and teachers.

"We're here to back the protesters and their legitimate demands, which include teachers' rights," said Aqeel Atshan, a professor on strike in Baghdad's Tahrir (Liberation) Square, the epicentre of the protest movement.

In the southern port city of Basra, around 800 students returned to camp outside the provincial government headquarters days after they had been pushed out by riot police.

Schools were also shut in the protest hotspots of Diwaniyah and Nasiriyah.

"Students, boys and girls alike, are all here for a sit-in," another demonstrator in Tahrir told AFP.

"If Sistani gave the orders for mass civil disobedience, everything would close -- the government, the oil companies, everything. That's how we'll have a solution."

Iraq's parliament will meet on Wednesday afternoon to hear from the head of the United Nations' mission in Iraq (UNAMI), Jeanine Hennis-Plasschaert.

She will address the main political blocs and brief lawmakers on her meeting with Sistani, who in a significant move backed a UN roadmap out of the crisis.

Oil-rich Iraq is ranked the 12th most corrupt country in the world by Transparency International, and youth unemployment stands at 25 per cent.

Demonstrations erupted on October 1 in fury over a lack of jobs and corruption, initially fracturing the ruling class.

But after a series of meetings led by Iran's influential Major General Qasem Soleimani, a consensus emerged at the weekend over the government remaining intact and both Saleh and Sadr appear to have changed their tunes.

Sadr, who is reported to be in Iran, took to Twitter on Wednesday to call on parliament to enact reforms and for "a general strike, even for one day," but did not demand the premier step down.

Saleh, too, appears to have dropped the idea of early elections.

The agreement brokered by Soleimani appeared to pave the way for a crackdown on demonstrations over the weekend that sent the death toll from protests to well over 300.

Iraq has faced growing criticism over its response to rallies, with rights defenders accusing authorities of shooting live rounds at protesters and curtailing freedom of expression with an internet blackout and mass arrests.

US Secretary of State Mike Pompeo said he spoke to Abdel Mahdi by phone late Tuesday and "deplored the death toll among the protesters as a result of the Government of Iraq's crackdown and use of lethal force".

"I called on him to protect the protesters and to address their legitimate grievances," Pompeo said.

Also on Wednesday, the president of Iraqi Kurdistan, Nechirvan Barzani, was in Baghdad to meet with the premier, president and speaker of parliament.

Barzani and Abdel Mahdi are believed to have good personal ties, and the Iraqi Kurdish authorities have backed the current government.

But they have worried that any amendments to Iraq's 2005 constitution as part of a reform process would infringe on Kurdish rights.