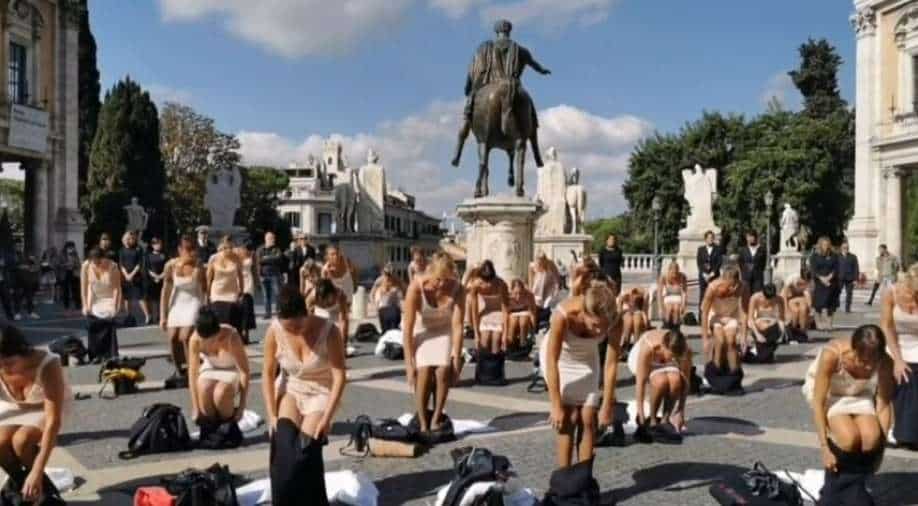 The new company starts with 52 jets and 2,800 employees, compared with around 110 aircraft and a workforce of 10,000 for Alitalia

Former Alitalia flight attendants stripped out of their uniforms down to their undies as a part of a flash mob, to protest against job losses and pay cuts under the new ITA airline.

Around 50 female workers, stood in front of Rome's town hall, Campidoglio, and slowly removed their uniforms in silence to demonstrate against the working conditions of their colleagues re-hired by Italy's new airline company ITA Airways.

The protestors remained barefoot, wearing only a slip, in silence for a few minutes. After this, they gathered up their garments and shoes as they together shouted, "We are Alitalia!"

Italy's decades-old airline flew its last flight on October 14. ITA started flying in place of Alitalia on October 15 after the airline was grounded due to financial losses and failed rescue attempts.

ITA President Alfredo Altavilla, in a statement said, "Discontinuity doesn't mean denying the past, but evolving to keep up with the times."

"ITA Airways is being born right-sized, in the optimal dimensions both in terms of the size of its fleet and its destinations," he said. "We don't carry with us the negative inheritance of being too big that conflict with the economic reality."

The new company starts with 52 jets and 2,800 employees, compared with around 110 aircraft and a workforce of 10,000 for Alitalia.

The Italian government is due to invest 1.35 billion euros over three years in the new company. As per Union officials, those who will work for ITA are being hired at significantly lower pay scales.

The Union leaders have been urging the government to extend unemployment benefits for as long as five years.