Foreigners flock to Gibraltar to wed during pandemic 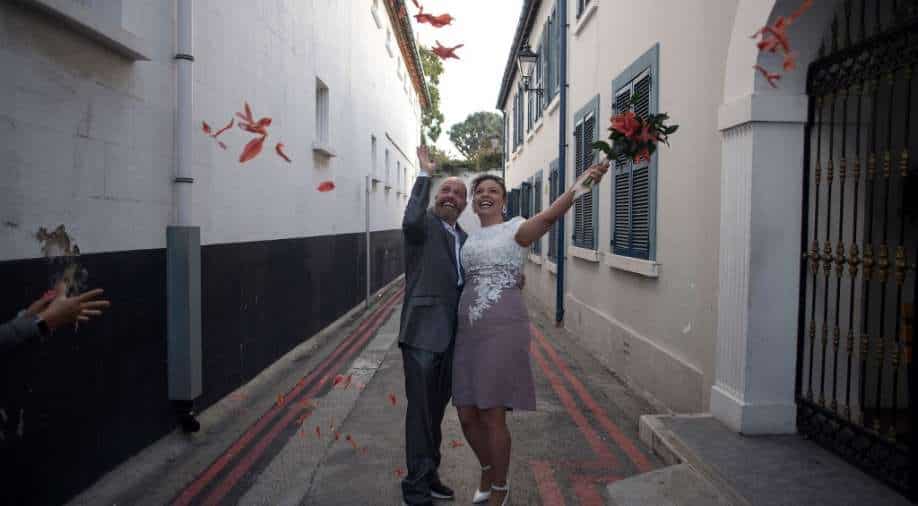 With government offices closed due to virus restrictions, the 40-year-old photographer and his partner struggled to get the documents they needed for a wedding license and faced a long wait for an available time slot for the ceremony.

Gibraltar was never on Bruno Miani's list of places to visit -- but that all changed when the pandemic upended his plans to marry his girlfriend in Dublin where they live.

With government offices closed due to virus restrictions, the 40-year-old photographer and his partner struggled to get the documents they needed for a wedding license and faced a long wait for an available time slot for the ceremony.

So the Brazilian couple took a low-cost flight to Malaga and then traveled by bus to Gibraltar, a tiny British territory at the southernmost tip of Spain where on Tuesday they tied the knot at the local Registry Office before a portrait of Queen Elizabeth.

"The fastest way to get married now is to go to Gibraltar," said Miani, whose eyes welled with tears when the registrar declared that he and Natalia Senna Alves de Lima were now legally husband and wife.

"We love each other a lot. We already live together as a married couple. This makes it official."

Gibraltar requires minimum bureaucracy to get married and there are no virus border restrictions, which has helped turn it into a wedding hotspot during the pandemic.

Couples just need to present their passports and birth certificates, and stay in the territory overnight either before or after their wedding.

They then just need to have their marriage registered by the authorities in their home country.

Wedding planners report huge demand from couples from outside the territory.

Many marriages being celebrated in Gibraltar involve couples of different nationalities in long-distance relationships who could not travel to each other's country to get married and start their lives together because of virus travel restrictions.

Often there is a pressing need to wed, such as the case of a couple whose insurance would not cover the expensive fertility treatment they needed to have a child unless they were married, said Hindle.

A common scenario involves a person being offered a job in another country and they can only bring their partner with them if they are legally married, she added.

"It's heartbreaking," said Hindle. "It is not just because they fancy getting married during COVID because it is a story for the grandkids."

The couple met in January in St.Petersburg where Gerow was working at the time but after he had to return to the United States in June, they were kept apart by virus travel bans which prevented them from visiting each other's country.

As a married couple, she will now be able to join him in the US.

If the option of getting married in Gibraltar did not exist "we would still be video chatting everyday," Gerow said.

Gibraltar is also drawing many couples from neighboring Spanish regions because its rules on the use of face masks in public and the size of social gatherings are less strict, said Resham Mahtani, a wedding planner at Rock Occasions.

Spain's southern Andalusia region which surrounds the British territory limits private gatherings to a maximum of six people indoors, compared to a limit of 16 people in Gibraltar which only recorded its first COVID-19 death earlier this month.

Most couples who come from further away attend their wedding without any family present because of the expense of travelling to Gibraltar. Many use laptops and mobile phones to broadcast the ceremony over the internet to loved ones back home.

"We were all alone, away from my friends and family. That was really difficult," said Liza Ursini, a 57-year-old nurse from Canada who travelled to Gibraltar last month to marry a man from the southern Spanish city of Seville.

He was then finally able to move to her hometown in the French speaking province of Quebec so they could start living together.

The ease of getting married in Gibraltar made international headlines when John Lennon married Yoko Ono there in 1969 after facing a series of hurdles in other countries.

The event was immortalized in a picture of the couple standing in front of Gibraltar's famous limestone promontory at the territory's airport and in the Beatles song "The Ballad of John and Yoko".

The territory has dealt with the surge in demand by increasing the number of weddings carried out daily at its tiny registrar's office and expanding the number of outdoor venues where ceremonies can be held.

Gibraltar's Chief Minister Fabian Picardo told AFP he was "delighted that Gibraltar has become known as a place of love rather than a place of division."

For anyone who needs to "make that bond of love official and legal, Gibraltar is the place for you," he added.