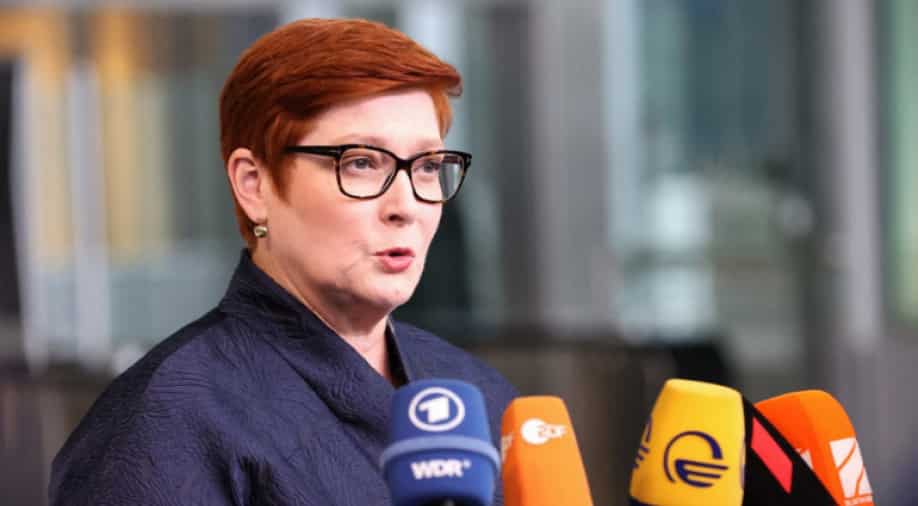 Australian Foreign Minister Marise Payne speaks to the press as she arrives for a meeting of NATO foreign ministers at NATO headquarters, in Brussels Photograph:( AFP )

Australia's Foreign Minister Marise Payne on Sunday (April 17) said that her country will continue defence cooperation with the Solomon Islands.

Her statement comes as the Pacific nation is mulling signing a security pact with China. The Solomon Islands are only 2,000 km (1,200 miles) from Australia.

Canberra has opposed the proposed security agreement with China saying it can undermine regional stability. It is concerned that China will increase its military presence in the Solomon Islands.

Chinese police and military officers will protect companies and infrastructure as per a leaked draft of the Solomon Islands-China deal.

Reaffirming her faith in the Solomons security treaty, Payne explained how it helped the Solomon Islands during the unrest triggered by demonstrations against Prime Minister Manasseh Sogavare.

Along with Australia, New Zealand, Fiji, and Papua New Guinea are members of the treaty under which ''assistance force made up of Pacific family countries'' is provided to its members.

When asked if Australia's allies agree with her point of view, Payne said "Yes, that is absolutely my view and it is the view of Pacific partners".

"But there is also a concern that there has been a lack of transparency in relation to this agreement," she added.

China's deepening security ties with the Solomon Islands has sparked concerns over its growing influence in the region.

It hopes Seselja will convince Sogavare "to consider not signing the agreement" with China.

"With a view that a strong and stable Solomon Islands is healthy for the security of the region," Sogavare will send his foreign ministers to other countries in the region.

In response, Zhao Lijian, a spokesperson for the Chinese foreign ministry, said "Australia should respect China and the Solomon Islands’ sovereignty and their own choices with an objective and rational attitude and not instigate a confrontation."