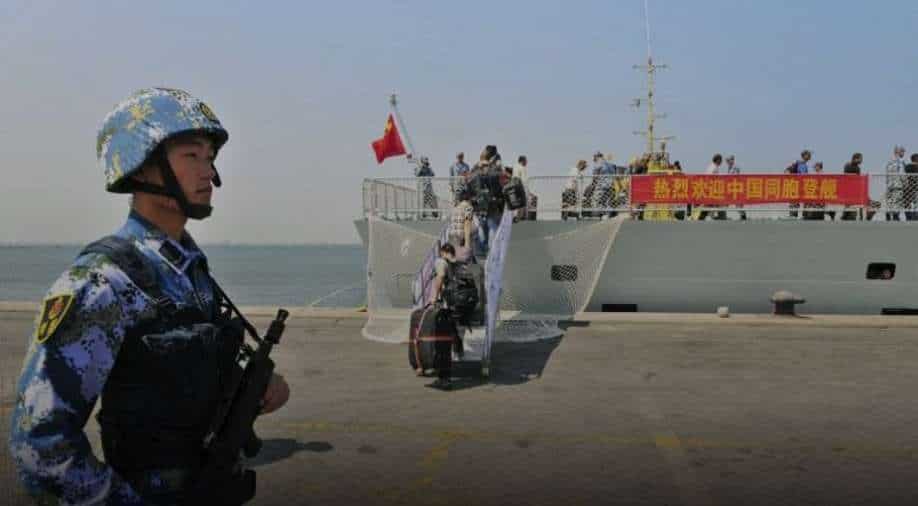 A navy soldier (L) of People's Liberation Army (PLA) stands guard as Chinese citizens board the naval ship "Linyi" at a port in Aden, in this March 29, 2015 file photo. Photograph:( Reuters )

According to a leaked document, the pact would empower Beijing to send police and military to the Pacific nation at the request of the government, as well as to defend its own citizens and interests.

After a wide-ranging proposed security agreement between Beijing and Honiara was leaked online, Australia's defence minister said on Friday that any move to construct a Chinese military base in the Solomon Islands would be a cause for concern.

The plans, which must be approved by the Solomon Islands' cabinet, would allow China to deploy security and navy forces to the Pacific island nation.

Australia is concerned about a proposed security pact between China and the Solomon Islands, which may provide a safe harbour for Chinese navy warships nearly 2,000 kilometres (1,243 miles) from Australia's mainland.

A copy of the agreement was distributed on social media by a New Zealand academic on Thursday, prompting the ministers to speak out.

The Australian Broadcasting Corporation confirmed the document's authenticity, although it's unknown how far the talks have progressed.

In an interview with Channel Nine, Defence Minister Peter Dutton said in an interview that Australia had 50 police in the Solomon Islands at the request of Honiara and that they would remain there until 2023.

"We would be concerned, clearly, at any military base being established and we would express that to the Solomon Islands government," he said.

The Solomon Islands would be able to request Chinese military aid in the event of a disaster or political disturbance, while Beijing would be permitted to "perform ship visits to, carry out logistical replenishment in, and have stopovers in" the Solomon Islands, according to the paper.

Watch | Gravitas: China gets another military base in Tajikistan

In the last decade, China has increased its footprint in the Pacific as part of its global outreach to poor countries to strengthen economic and security connections.

Watch | Gravitas: Chinese bribes triggered a riot in this country

In recent years, the Solomon Islands administration, led by Prime Minister Mannesseh Sogavare, has deepened ties with Beijing, including a disputed decision in September 2019 to switch the country's diplomatic recognition from Taiwan to China.