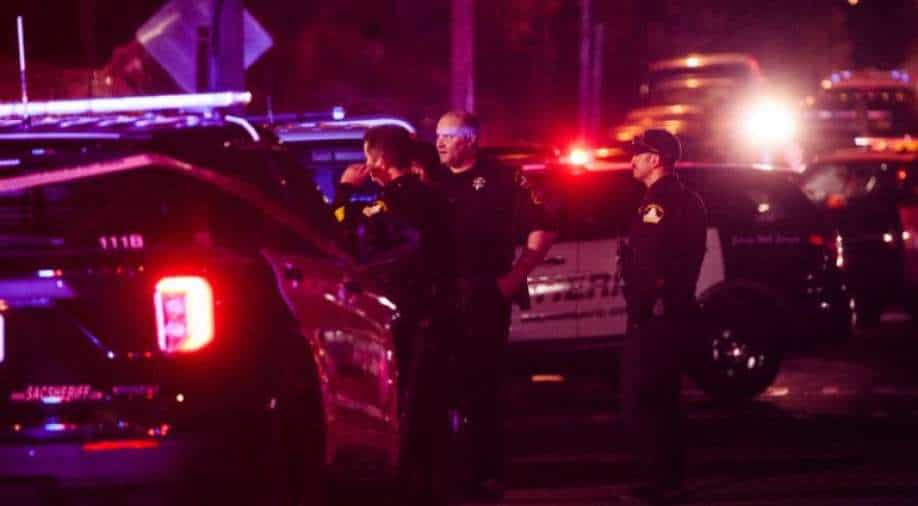 Police officers investigate the scene of a shooting at The Church in Sacramento on February 28, 2022, in Sacramento, California. Photograph:( AFP )

The shooting erupted at about 5 p.m. local time inside The Church in Sacramento, located in the Arden-Arcade community on the eastern edge of Sacramento's city limits, Grassmann told reporters

A man shot and killed his three children and a fourth person before taking his own life on Monday (Feb. 28) in an outburst of gun violence that unfolded in a church near California's capital, police said.

Sacramento County Sheriff's Department spokesperson Rod Grassmann told reporters near the scene that investigators were seeking clues to a motive for the bloodshed but believed the shooting stemmed from a domestic dispute.

The shooting erupted at about 5 p.m. local time inside The Church in Sacramento, located in the Arden-Arcade community on the eastern edge of Sacramento's city limits, Grassmann told reporters.

A church employee on an upper floor of the church at the time told authorities he heard a single gunshot, followed by several more shots before he ran out of the building and called police, according to Grassmann.

Sheriff's deputies arriving at the scene found five people shot to death - three children under the age of 15, the father and another adult who was not immediately identified by investigators, Grassmann said.

Also read | Russia-Ukraine conflict: Will there be a nuclear war? Your questions answered

He said the father was believed to have shot the four other victims before turning the gun on himself. Authorities did not say whether the second adult was related to the other family members or whether the person was a man or woman.

Local television station KTVU cited Sacramento County Sheriff Scott Jones as saying that investigators believe the shooting unfolded during a supervised visit between the father and the children, and that the fourth victim was the adult chaperone.