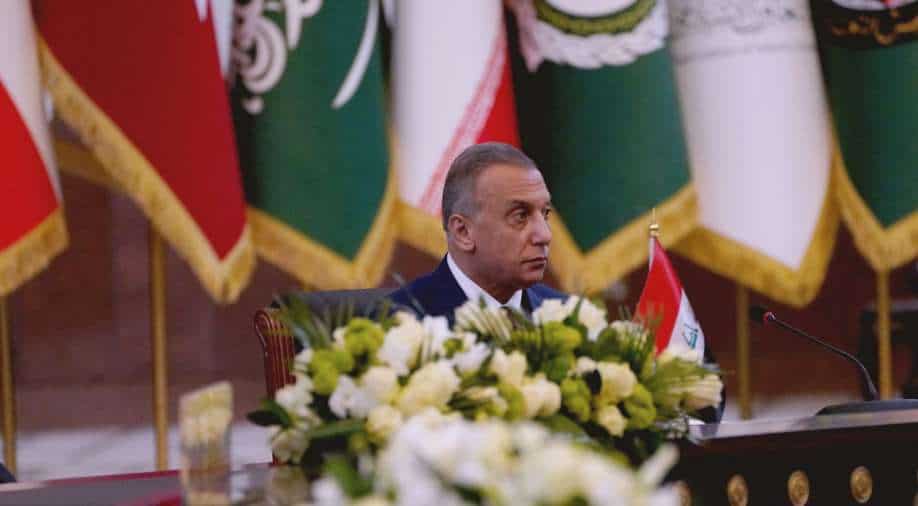 Leaders of Iranian-backed militias to which most of the protesters belong have blamed al-Kadhimi, Iraq’s former intelligence chief, for the use of force that killed at least one person

“I am fine, praise be to God, among my people, and I call for calm and restraint from everyone, for the sake of Iraq,” the prime minister, Mustafa al-Kadhimi, wrote on Twitter after the predawn attack. In a video appealing for peace, he appeared with his wrist wrapped in what seemed to be a white gauze bandage.

A senior official in the Iraqi Interior Ministry, Maj. Gen. Saad Maan, said on state television that the prime minister’s house in the fortified Green Zone had been targeted by three armed drones.

Iraq’s president, Barham Salih, described the attack as a prelude to a coup, tweeting that “we cannot accept that Iraq will be dragged into chaos and a coup against its constitutional system.”

On Friday, tensions over results of the October 10 parliamentary elections came to a head after a clash outside the Green Zone the site of the executed leader Saddam Hussein’s former palace grounds  where the US Embassy and many other Western diplomatic missions are. Iraqi security forces used tear gas and live ammunition on militia members protesting the election results after the protesters tried to breach the heavily fortified zone’s barriers.

Leaders of Iranian-backed militias to which most of the protesters belong have blamed al-Kadhimi, Iraq’s former intelligence chief, for the use of force that killed at least one person.

Asaib Ahl al-Haq, one of the most powerful Iranian-backed militias, identified the person killed as Abdul Latif al-Khuwayldi, one of its brigade deputy commanders. The Iraqi Health Ministry said that more than 120 other people at the demonstration had been wounded, most of them security forces trying to hold back the protesters.

Iraq’s election commission has yet to announce final results for the nationwide elections held almost a month ago as it wades through fraud accusations. Shiite cleric Muqtada al-Sadr has emerged as the biggest winner, at the expense of Iranian-backed parties that lost seats. Al-Sadr, whose fighters battled American forces during the U.S.-led occupation of Iraq, is viewed as an Iraqi nationalist with an uneasy relationship with Iran.

Political analysts believe those gains were mostly because of a more sophisticated strategy by the Sadrist organization, taking advantage of a new electoral system, which has an increased number of electoral districts. The United Nations, which had observers at the polls, praised the process. The political wings of the militia groups that lost seats claim they were defrauded.

One of al-Kadhimi’s main goals has been to rein in Iranian-backed militias. After 2014, when many were created to fight the Islamic State group, some of the biggest militias have been integrated into Iraq’s official security forces. Those militia forces, though, only nominally answer to the Iraqi government and some are blamed for continuing attacks on US interests.

No group has yet claimed responsibility for the attack Sunday on the prime minister’s residence.

Most analysts saw the attack as a warning to al-Kadhimi and his allies rather than as an assassination attempt. The prime minister has remained in power by balancing Iraqi relations between Iran and the United States, and he is seeking another term.

“What we’ve seen in the past is the use of violence, not necessarily to assassinate, but to warn that, ‘We’re here,’ ” said Renad Mansour, head of the Iraq Initiative at the think tank Chatham House. “I think this would also be a warning perhaps gone wrong because you can gain a bit more popularity and sympathy as the prime minister who survived an assassination attempt.”

The attack, though, significantly complicates efforts to form a government. Such efforts rely on forging alliances among parties, some of them with armed wings, to form the biggest bloc in Parliament.

A US State Department spokesperson, Ned Price, called the strike Sunday an “apparent act of terrorism” that was “directed at the heart of the Iraqi state.”

Although al-Kadhimi said that both he and those who work with him were fine, the Iraqi military command said that several guards were being treated for injuries.

Photographs released on state media of damage to the house showed cracked concrete steps, doors apparently blown off their hinges and what looked like shrapnel holes in the back of a parked vehicle.

Al-Sadr, whose movement has won the highest number of seats of any political bloc in Parliament, described the attack as an attempt to return the country to the control of “nonstate forces to make Iraq live under riots, violence and terrorism.”

Asaib Ahl al-Haq, the militia group, which was among those that lost seats in the parliamentary elections, called the strikes an attempt to divert attention from the deadly clash outside the Green Zone on Friday and blamed foreign intelligence agencies.

A spokesperson for the Iranian Foreign Ministry, Saeed Khatibzadeh, expressed relief that the Iraqi prime minister had not been hurt in the attack. In a statement, Khatibzadeh blamed the strikes on an unspecified foreign plot.

Abu Ali al-Askari, the nom de guerre of one of the leaders of Kitaib Hezbollah, a main Iranian-backed militia, accused al-Kadhimi of playing the role of a victim and said that no one in Iraq considered the Iraqi leader’s home worth losing a drone over.

“If there is anyone who wants to harm this Facebook creature there are many ways that are less costly and more guaranteed to achieve this,” he said in a posting on his Telegram channel.

While the attack has raised fears of growing instability amid Iraq’s political turmoil, the country’s citizens seemed to generally shrug it off. Later Sunday morning, the start of the Iraqi workweek, Baghdad streets were full of the normal rush-hour traffic jams.

Near one of the entrances to the Green Zone, food vendors placed spatchcocked chickens to cook over charcoal grills on crowded sidewalks. Inside a butcher shop, a green parrot perched on a pole greeted customers by chirping out “meenoo” — “who is that” in the Iraqi dialect of Arabic.

“We are used to these incidents,” said Ali al-Hussayni, 50, the shop owner, about the attack on al-Kadhimi. “I am not saying people are not scared at all, but we have seen far worse than this.”