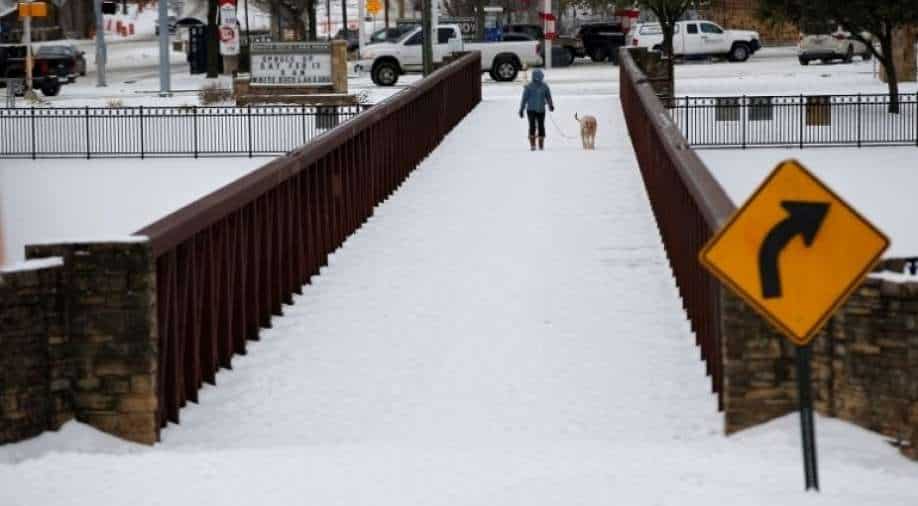 Most iterations also point out that the purported fake snow 'burns' because the lighter leaves a 'scorch' mark on the snowballs.

Viral videos are circulating on social media, claiming that the devastating snow in the Texas storm was “fake” or “created by the government”.

People are burning snow in the US to prove that the snow is fake. Thousands have embarked on this mission. Snowballs are being lit one after another with ith zero regards for science or sublimation.

A now-deleted TikTok video, which has been viewed over 854,500 times, claimed Bill Gates was responsible for the 'scorched snow’.

Bill Gates was also blamed for the coronavirus pandemic by several conspiracy theories who also claimed that he inserted chips into the vaccines.

Another TikTok video claimed that China sent fake snow to the US to prove global warming is real.

When fire hits the snowball, the snow turns from solid to gas, that is, it disappears. Most iterations also point out that the purported fake snow “burns”, because the lighter leaves a “scorch” mark on the snowballs.

However, the markings and the smell result from the burning butane, which is a colourless gas usually used as fuel in lighters that has a “faint petroleum-like odour”. Butane, found in the lighters, is a hydrocarbon - a molecule which is part carbon and part hydrogen.

The reaction of barium hydroxide and ammonium chloride, which is often used as an example of endothermic reactions does produce a snow-like white powder material.

The substances used are toxic and used in small quantities; ammonia gas which can be produced during the experiment, is also an irritant. Similar conspiracy theories about alleged “synthetic” snow have been debunked in the past.

On several occasions in the past, President Biden has used the phrase “dark winter” to refer to the impact of COVID-19 during the cold season, when infectious diseases like influenza, traditionally peak as the bad weather drives people inside.

Biden and health experts have used this terminology not to predict the Texas winter storm as the post suggests, but to address an increase in contagion and death toll from COVID-19 over the winter months before vaccines became widely available.

There is no evidence the snow in Texas’ is “fake” or “created by the government”. Viral videos claiming that the snow “is not melting” and that it’s “burning” instead, show a common phenomenon that has been explained in the past.

As explained by NASA’s Earth Observatory, the cold wind from the Artic, which moved in on February 13, hit Texas particularly hard, leaving southern areas of the state experiencing colder temperatures than parts of Alaska.