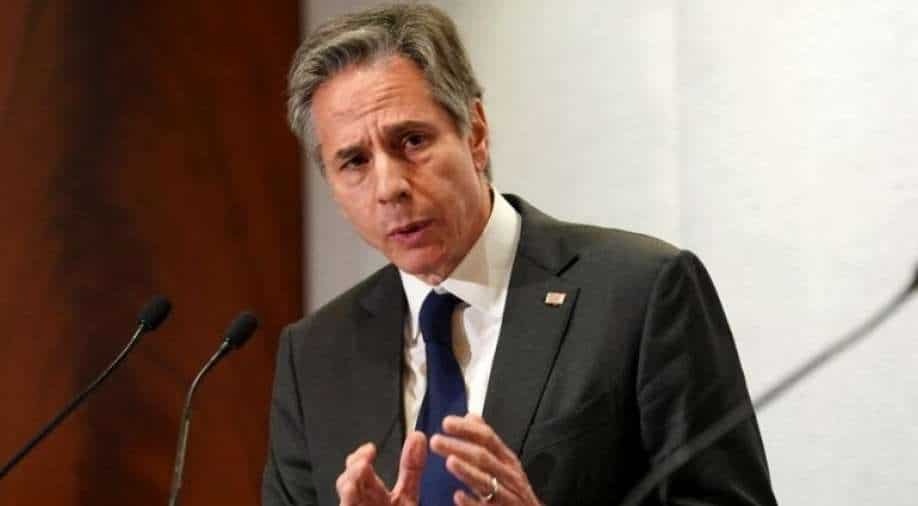 US Secretary of State Antony Blinken takes part in a press conference at the end of the Quadrilateral Security Dialogue (Quad) foreign ministers meeting in Melbourne Photograph:( AFP )

US Secretary of State Antony Blinken said that even though Russia's threat to Ukraine occupies Washington right now, the longer-term issue is China's rising power

The United States has vowed to step up its efforts in the Indo-Pacific region as a push back against China.

The top diplomats of the United States, Australia, Japan and India opened talks in Melbourne Friday on deepening their Quad alliance, hoping to blunt China's expanding power across the Asia-Pacific region.

A new Biden administration strategy for the Indo-Pacific emphasizes not going it alone in dealing with China’s growing influence and ambitions, underscoring the administration’s efforts to strengthen security cooperation and other ties with allies and partners in the region.

"The PRC is combining its economic, diplomatic, military, and technological might as it pursues a sphere of influence in the Indo-Pacific and seeks to become the world's most influential power," it said referring to the People's Republic of China (PRC).

China’s “coercion and aggression spans the globe, but it is most acute in the Indo-Pacific,” the administration declares in the document. It cited economic campaigns pressuring Australia, conflict along China’s Line of Control with India, pressure on Taiwan and “bullying of neighbors in the East and South China Seas.”

"Our collective efforts over the next decade will determine whether the PRC succeeds in transforming the rules and norms that have benefited the Indo-Pacific and the world."

US Secretary of State Antony Blinken said that even though Russia's threat to Ukraine occupies Washington right now, the longer-term issue is China's rising power.

"To my mind, there's little doubt that China's ambition over time is to be the leading military, economic, diplomatic and political power not just in the region but in the world," he told The Australian newspaper.

In 2022, @StateIVLP will conduct new exchange projects that will strengthen our security partnerships in the #IndoPacific. Emerging foreign leaders from Australia, India, and Japan will experience the U.S. firsthand and build lasting relationships with American counterparts. pic.twitter.com/6bGbP1KX7W

In a 12-page strategy overview, the Biden administration says its plan includes continued support for the self-defense of Taiwan, which China claims as its territory; deeper military integration with countries in the region to deter China, as with last year’s nuclear-powered submarine agreement with Australia; and expanding efforts against cyber attacks and threats from emerging technology.

In its document, the United States vowed to modernise alliances, strengthen emerging partnerships, and invest in regional organisations. It particularly stressed the importance of "a strong India" as a partner in a positive regional vision.

A review of our bilateral cooperation with @SecBlinken. The readout on progress in different domains was positive. Our strategic partnership has deepened so visibly. pic.twitter.com/LuBkYKa01l

It said the United States would pursue a "free and open Indo-Pacific ... through a latticework of strong and mutually reinforcing coalitions."

Under an action plan for the next 12-24 months, the document said Washington would "meaningfully expand" its diplomatic presence in Southeast Asia and the Pacific Islands and prioritize key negotiations with Pacific island states that cover access for the US military and which have appeared to stall in the past year.

"We will refocus security assistance on the Indo-Pacific, including to build maritime capacity and maritime-domain awareness," it said.

The US has sought to broaden the Quad from a maritime security partnership to other areas, like fighting the coronavirus pandemic.

Launched in 2007, the Quadrilateral Security Dialogue, or Quad, has given a framework to what began as joint US-India-Japan naval exercises in the Indian Ocean, dubbed the Malabar Exercises.