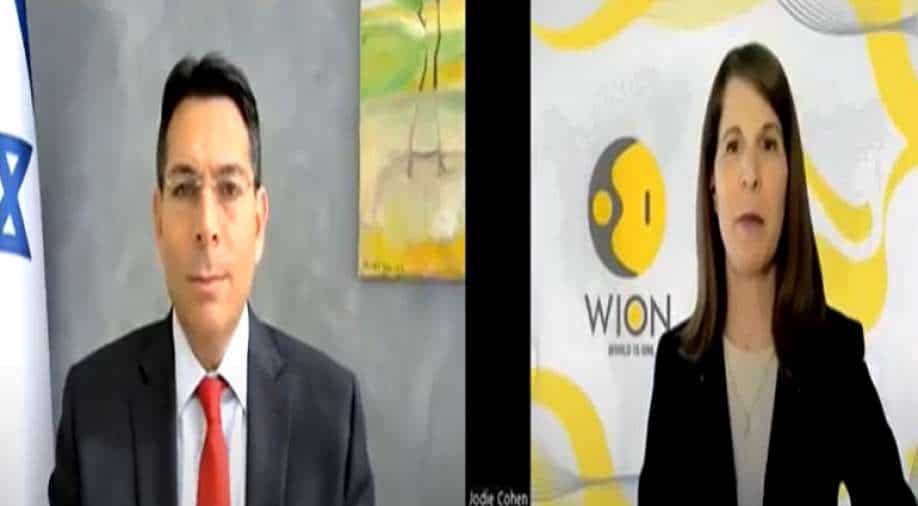 Danny Danon is Israel’s former Ambassador to the UN, and current Chairman of World Likud.

10th May 2021 saw the first rockets fired from Gaza towards Israel. On the first anniversary of the Hamas-Israel conflict, which lasted for 11 days, WION correspondent Jodie Cohen, spoke exclusively with Ambassador Danny Danon, about the way forward towards peace in a fraught region.

Danon is Israel’s former Ambassador to the UN, and current Chairman of World Likud.

Likud is, of course, Israel’s largest political party, which leads the Opposition and is headed by former Prime Minister, Benjamin Netanyahu.

Here are the excerpts -

WION: Ambassador Danon, thank you for speaking with WION… On the first anniversary of rockets fired from Gaza, this year we’ve again seen unrest on the Temple Mount / Al Aqsa compound…what do you think is the short-term solution to preventing further violence?

Danny Danon: Thank you for having me today. I think what we have seen today is the continuation of incitement. Incitement on a holiday that is Ramadan – a Muslim holiday – to incite against the Jews and unfortunately, we see a wave of terror attacks here in Israel targeting the civilians, using the Temple Mount as a reason. Israel is a peaceful country and Jerusalem is the peaceful capital of Israel with total freedom of religion. The answer to that is to stop the incitement, to demand the local leadership not to allow those incitements to be all over the social media and not to allow those radical leaders to take advantage of a holiday.

WION: What’s the long-term solution for Israelis and Palestinians to be able to live side by side in peace?

Danny Danon: I think eventually we will have to negotiate and unfortunately, we do not see any viable partner. Only recently, we have signed the Abraham Accords with a few Arab countries and we are very proud of that and the peace agreements we already have with Jordan and Egypt. So, we are capable of compromising and signing peace agreements, but we need a partner for that. I think President (Mahmoud) Abbas is not a partner, He is not willing to negotiate with Israel or to stop the incitement or stop paying the salaries of convicted terrorists. So, we will have to wait for a new leader to emerge who will be ready to sit down, negotiate and achieve peace.

WION: Your book, ‘In the Lion’s Den’, sets out a roadmap for Israel’s future on the regional and global stage. Where does the roadmap lead?

Danny Danon: In the book, I spoke about the five years I spend at the UN (United Nations). I describe not only what I achieved – the success and disappointments – but also a vision for Israel. I am optimistic that we have a great future in the region. We have a lot of allies and we will hopefully sign peace treaties with other countries in the region. I think that will be the answer to the radical ideas that are being spread by Iran in the region.

WION: Is your book your manifesto for becoming a future Likud leader, or even a leader of a new party?

Danny Danon: I am a proud member of the Likud party. I am chairman of the World Likud and I intend to stay active in my party. I ran in the past for the position of chairman in the party and definitely I intend to come back to public life in the future using the skills and connections I acquired at the UN for the benefit of the people of the country I love so much.